A male bluebird perches with a fresh-caught grub on a low maple branch. Photo: Rick Woolley

To help confirm your sighting, look for clues in habitat and behaviour, as well as colour: read the Natural History and Identification sections below, or download our Western Bluebird Fact Sheet (PDF). If you can, note the colour of the birds’ leg bands. Photos are great!

Please report sightings immediately to the Cowichan Bring Back the Bluebirds Project. Thank you!

What do those coloured bands mean, anyway? (external site)

Western Bluebirds are a small member of the thrush family, which includes their much bigger cousin the American Robin. Male Western Bluebirds are shiny blue above with rust-orange extending from a vest on the breast onto the upper back. Females are considerably more muted than males, and are gray-buff with a pale orange wash on the breast and blue tints to the wings and tail. The throat is blue in males and gray-buff in females, and the lower belly is whitish.

There are other birds which can appear similar to bluebirds–especially when they are in motion–but bluebirds can be identified by behaviour, as well. Western Bluebirds tend to perch fairly low to the ground on prominent limbs, fence posts, and signs, sitting erect, and often appearing somewhat chubby or as though they are “sitting on their feet”. They also tend to stay low to the ground when flying. They forage for insects by scanning the ground from a perch, then abruptly dropping to seize something they’ve spied. Swallows, on the other hand, are aerial acrobats, swooping and swerving through the air feeding on air-borne insects.

Of course, not all individuals look the same. There are brightly-coloured females, dull males, and a whole range of colour variation in between. 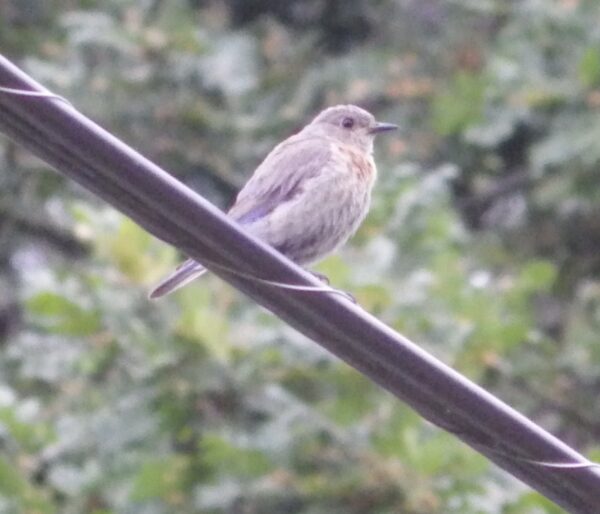 This female bluebird is very pale in colour. In this lighting, and with her wings behind the wire, it is harder to identify her as a bluebird. Photo: J. Green, GOERTS

In poor lighting or when they are moving about, it can be hard to identify whether you’re looking at a male or a female, or even if you’ve got a Western Bluebird at all. 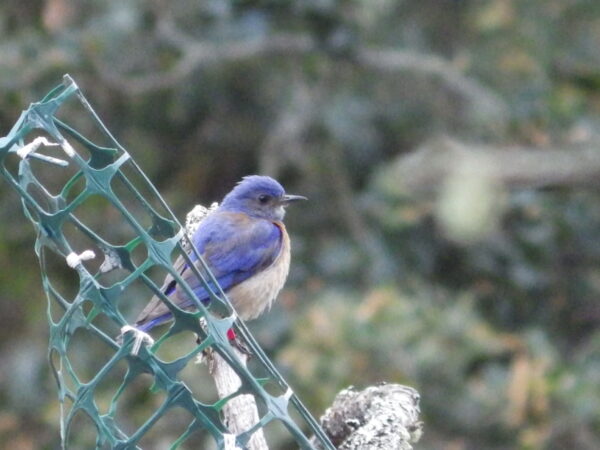 Her mate is a very bright blue, but his rusty “vest” is not as prominent as on some other male bluebirds. Photo: J. Green, GOERTS

Behaviour is often your best clue to whether you are seeing Western Bluebirds or swallows.

Western Bluebirds are bright, energetic songbirds, whose brilliant blue and rust flashes as they swoop lightly to the ground from low perches. Their strong association with Garry Oak savannahs and meadows comes from several features of these habitats: nesting cavities in old oak trees, low branches to use as hunting perches, and open grassy areas with plenty of their insect prey.

Western Bluebirds are primarily insectivorous, actively hunting for ground-dwelling insects from perches on fences, shrubs, and low branches. Large, open areas with low grasses and open ground are ideal for bluebirds because they can easily see insects on the ground. 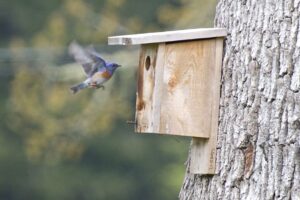 Bluebirds are cavity nesters, finding safe nesting sites in holes in trees, but they cannot excavate their own holes: they rely on old woodpecker cavities, natural holes in trees, or nestboxes. Nestbox programs are a successful way to rebuild populations of bluebirds and other native cavity nesters that have declined as natural nestholes have disappeared across the landscape.

Western Bluebirds in our area are short-distance migrants. While we do not know precisely where our Salish Sea area populations go for the winter, they most likely head to central or southern Oregon. They return from their southern wintering grounds in late February or March, to prospect for good nesting areas. Males arrive first to stake out a territory, singing on exposed perches and performing aerial displays around the nest cavity. Birds start breeding in late March or early April. Nests are built mostly from grass, and females lay 4-6 pale blue to white eggs. Chicks hatch after two weeks of incubation and the parents share the duty of feeding them insects. Chicks spend another 19-22 days in the nest until they fledge. Once the young fledge, the male feeds them and the female may raise another brood. Because they return and begin nesting so early, bluebirds can often raise two clutches in a season; however, they also run the risk that poor weather will prevent them from providing sufficient food or warmth to nestlings, and they may lose the first clutch.

Juveniles share a snack at a mealworm feeding station. Photo by Julia Daly

Nesting pairs maintain a small territory, which they share with their own offspring for the season. The juveniles from a first clutch will often help to feed a second clutch, and it is not unusual to see large bluebird families foraging together in late summer. The birds will return to established territories year after year, often to the same nestbox. Occasionally, an unmated bluebird from a previous season’s nest, or even an unmated sibling of one of the adult mates, will help to raise the clutches. Western Bluebirds will successfully share territory with swallows, but the exotic invaders European Starlings and English House Sparrows will drive them out or even kill them.