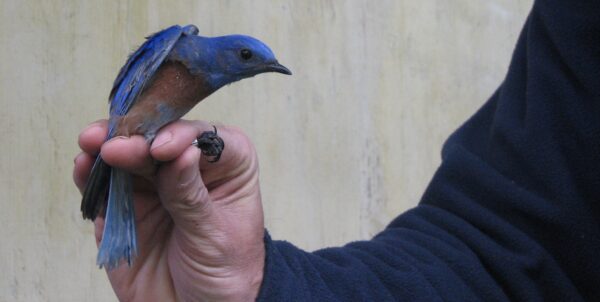 A translocated male bluebird receives his leg bands before being released into a temporary aviary with his mate. Photo: B Rose

Translocation can be a valuable tool for conserving at-risk populations or species, particularly wherever geographic barriers or a species’ dispersal abilities prevent the natural recolonization of former habitat areas. In most cases, translocation involves the reintroduction of a species into areas within its historic range where it has become extirpated (locally extinct) once the factors that contributed to its disappearance have been addressed.

To re-establish a founder population, Bring Back the Bluebirds has teamed up with Ecostudies Institute (external website), pioneers in the field of migratory songbird translocations in North America, the Province of BC, and a number of other organizations to develop a translocation program to transport and release 8-10 bluebird pairs every breeding season for five years. From March to June each year, the focus of the Bring Back the Bluebirds project is on translocations, which involve the capture, transport, and “soft release” of Western Bluebirds into their former habitat on Vancouver Island.

The closest population of Western Bluebirds large enough to serve as a source for translocations is found 200 km southeast of the reintroduction site, at Joint Base Lewis-McChord military base (JBLM) in south Puget Sound, Washington. This population, like others in the Georgia Depression, also experienced dramatic declines in the 20th century. However, an extensive nestbox program, initiated in the early 1980’s, has enabled the population to recover. Once numbering only a few pairs, the population has rebounded to more than 300 birds. The population at JBLM now serves as the source population for Bring Back the Bluebirds’ translocations, and was the primary source for the reintroduction initiative on nearby San Juan Island, WA. 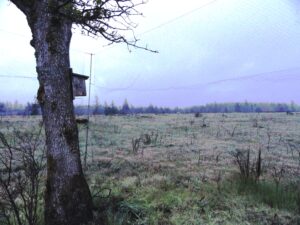 Once a bluebird pair is selected, recorded calls are played to lure them into the nets that are placed around their nestbox. Photo: C Masson, GOERT

Beginning in March, the population at JBLM is monitored to locate the nestboxes where bluebird pairs are starting to exhibit breeding behaviour, such as territorial defense or nest-building. Throughout March and April, we capture as many as six of these bluebird pairs and transport them to the Cowichan Valley on Vancouver Island. Then, in May and June, we repeat this process with up to three Western Bluebird families – breeding pairs with their first brood of nestlings. Bluebirds at JBLM are lured to their nestbox by recorded Western Bluebird calls, where they are then captured as they fly into the mist nets (fine nets designed for the live capture of birds) that are erected around their nestbox.

Once captured, the bluebirds immediately begin their journey from JBLM to the Cowichan Valley. It is a half-day’s travel by car and ferry, with brief stops to be examined first by a veterinarian and then by federal agents at the border. Each bird is transported in its own small cage supplied with food and covered with a light cloth to minimize disturbance. When families are transported, nestlings are placed in a nest-shaped bowl lined with soft cloth and covered with a light cloth. The rapidly developing nestlings have a voracious appetite and must be hand fed every 15-20 minutes by a technician for the duration of the trip, garnering new respect for the parents, who in the wild must carry on these feedings from dawn to dusk for up to 3 weeks!

While on route to the reintroduction site, nestlings must be hand fed live food every 15-20 minutes to keep up with their voracious appetite. Photo: G Slater, Ecostudies Institute

In anticipation of each pair or family’s arrival, an outdoor aviary is constructed at the release site. Most remaining bluebird breeding habitat is found on private properties, so we rely on generous landowners to volunteer suitable, safe, and secure areas for our aviaries.

Release sites are chosen for their proximity to suitable bluebird breeding habitat, which is characterized by an open landscape with scattered trees (ideally Garry Oaks) and shrubs, abundant mid-story perches, and an open, grass-dominated understory. Residential and agricultural lands that have these features can be a suitable substitute for the Garry Oak meadows that bluebirds historically occupied. The level of human disturbance and the prevalence of threats, such as pesticides, housecats, and House Sparrows, are other important considerations. When selecting an aviary/release site, we ask ourselves many of the same questions we do while assessing a property that might host a nestbox because there is a high likelihood that released bluebirds will establish a breeding territory and nest at or near their release site.

The aviaries, which measure 2.4 m on each side, allow plenty of space for bluebirds to exercise their wings. The aviary is designed to ensure shelter from sun, wind and rain while still being open (mesh) on one side to allow its occupants to see and hear their surroundings and acclimatize to their new environment. The aviaries contain a variety of branches for perching, two nestboxes, and dry grasses for nest-building. When families are translocated, the nestlings are placed in a handmade nest inside one of these nestboxes; when only pairs are translocated, these empty nestboxes allow the birds to express nest-building behaviour. Until the bluebirds are ready for release, they are monitored closely by a GOERT field technician and provided with live food and fresh water two times per day. 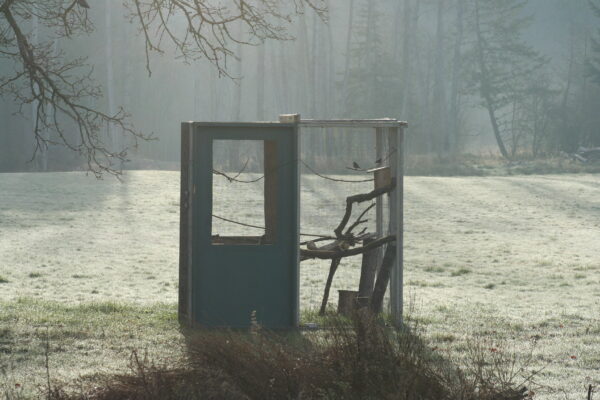 Each translocated Western Bluebird pair or family is held in an aviary at the release site for 1-3 weeks. In addition to providing care, the Project Technician closely monitors the bluebirds’ behaviour to determine when they are ready for release. Photo: J Daly, GOERT

If a translocation is successful, the released bluebird pair will establish a breeding territory within the reintroduction area and begin nest-building in one of our many nestboxes. Photo: J Daly, GOERT

Bluebird pairs are held in their aviary until they show signs of breeding behaviour, such as nest-building, or up to 3 weeks if no breeding behaviour is observed. Families are translocated when nestlings are already many days old and they are held in the aviary only until the nestlings have fledged (usually one week). Our approach is a type of ‘soft release’, in which the birds are given time to acclimatize and familiarize themselves with the sights and sounds of their new habitat before being released.

As they are released, the movements of the bluebirds are tracked. If they leave the site, every attempt is made in the following days to locate them. More often than not, our bluebirds tend to ‘approve’ of the habitat at their release site and begin prospecting for a nesting opportunity in the immediate area. In either case, once the birds are located, supplemental food is provided regularly to encourage the pair to remain where they are and establish a breeding territory.

How do we determine whether a translocation is successful? Throughout the breeding season, we closely monitor the reintroduced population. Post-release monitoring is as essential for evaluating translocation success as it is for determining other important demographic variables, such as adult population size, nest fate, and number of young hatched and fledged. Among other things, the data obtained through population monitoring reveals strengths and weaknesses in our translocation program which enables us to adapt and improve our techniques which further advances the science of translocation as a conservation tool.

In 2014, 78% of the pairs that were released through our translocation program established a breeding territory in the reintroduction area. While translocation success can be expected to vary from year to year, recent results are an indication that historic bluebird breeding habitat, enhanced with nestboxes, can once again support breeding bluebirds – and that is a reason for optimism. Successful translocations are an important first step towards restoring a breeding population of Western Bluebirds to the Georgia Depression region of BC.

The Bring Back the Bluebirds project is grateful to the many funders that have made the first three years of our translocation program possible.