Summer has just begun and halfway through the breeding season, bluebird activity is reaching its peak. Unfortunately, this year we have lost a few adult bluebirds, and even entire broods of eggs or nestlings, to predation or competition. Yet our bluebird population continues to grow in the Cowichan Valley since other bluebirds have been translocated from Washington, established territories, laid eggs that hatched, and brooded nestlings that fledged. As we have encountered new challenges and tragic setbacks over the past two months, Western Bluebird Reintroduction Project partners have worked hard to adapt to nature’s unpredictability – and the bluebirds give us many reasons for hope.

This young male, hatched near Quamichan Lake last year, returned to the area this April. He chose this hazelnut orchard as his breeding territory but since no single females returned this year, he did not find a mate. (Photo: Jemma Green, GOERTS).

Although we were happy to see so many returning bluebirds this spring, the arrival of predominantly lone males, or “bachelors,” has been bittersweet. Of the eight birds that returned on their own, four were young males that migrated back without mates; none of the females that hatched in the Valley in previous years returned this season. This biased sex ratio was also observed in the San Juan Islands Reintroduction Project, and is not unusual for small populations in the initial stages of establishment, partially since female bluebirds are more prone than males to migrate to new areas. 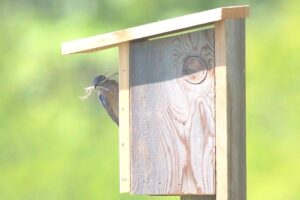 Pictured here in happier times, this female bluebird and her mate migrated back to the Valley in March and built their nest in the same box they used last year. She and her eggs were eaten by a predator in May. (Photo by Rick Woolley)

Compounding this problem of too many single males in the area, predation has since made “widowers” of the two males that did return with mates. Within a few days in mid-May, a savvy racoon, mink, or cat had wiped out two bluebird nests near Quamichan Lake that were in close proximity to each other, eating both of the adult females as well as 7 nestlings and 2 eggs. These were not just our first bluebird breeding pairs to arrive and the first nests to be built – these nests belonged to bluebirds that had nested successfully in previous seasons in the exact same nestboxes, raising many juveniles, some of which returned to the Valley this season. These losses, although sad, were not unexpected: with a lengthy list of threats, including domestic cats, the odds of a successful nest for most birds are usually less than 50%. This project has been fortunate to have encountered only three such cases of predation in our three seasons. Not wanting to test our luck further, we quickly installed predator guards on all other active bluebird nestboxes.

Unfortunately, predation is not the only threat facing nesting bluebirds. With just days before five nestlings were set to fledge, the nest belonging to this year’s first translocated breeding pair was attacked by a male House Sparrow. House Sparrows, an introduced European species, are a competitor for nestboxes and are territorial and aggressive, attacking and often killing adult or juvenile birds in other nestboxes within their territory. Fortunately, our Project Technician arrived mid-attack, just in time to save 2 nestlings from harm and rush the 3 injured nestlings to a nearby wildlife rehabilitation facility (a HUGE thank you to Island Wildlife Natural Care Centre, Salt Spring Island). Although one nestling later had to be euthanized due to an irreparable broken wing, the remaining nestlings continue to recover in captivity and will eventually be released to rejoin their parents and 2 siblings (now fledged) in the wild. 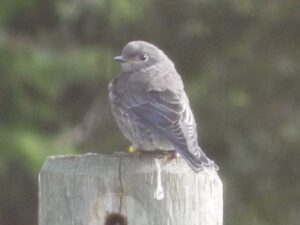 One of two juvenile bluebirds who survived a House Sparrow attack unscathed and fledged successfully from its nest in early June. (Photo by Jemma Green, GOERTS)

These cases of predation and competition serve to highlight the importance of a long-term perspective for rebuilding the bluebird population. In spite of nature’s challenges and as a result of 9 translocations, bluebird breeding season is still in full swing in the Cowichan Valley. Of the 6 translocations of pre-breeding pairs, 4 pairs remained in the valley and quickly established breeding territories. Of these, three pairs nested successfully, fledging a total of 15 nestlings, and already beginning second nests. In addition to translocating 6 pre-breeding pairs in late spring, we translocated 3 bluebird “families” in June (composed of a breeding pair and their first clutch of nestlings). All nestlings quickly fledged in the temporary aviary, and all 3 families have been released at sites near Quamichan and Somenos Lakes. The adults must have recognized that they were in ideal bluebird habitat, with open grasslands and scattered Garry Oaks, because they almost immediately established territories and chose nestboxes, and began building second nests, even while still looking after the fledglings from their first clutches.

With 3 second nests under way and as many as 3 more to come, the bluebird breeding season is far from over for 2014. We hope that the bluebirds will continue to defy the odds and successfully reproduce, as any of this year’s juveniles could return next year to build nests of their own.

How can you help our native songbirds, including Western Bluebirds? Two simple ways are to keep your cat indoors, especially from June to August when young birds are most vulnerable as they practice flying, and to be sure your seed feeder and nestboxes are not benefiting English House Sparrows.

Thanks to our nestbox and aviary hosts, volunteers, Island Wildlife, and our funders for their generous support so far this season. We couldn’t do this without you!