Bluebirds Decide Not to Migrate! 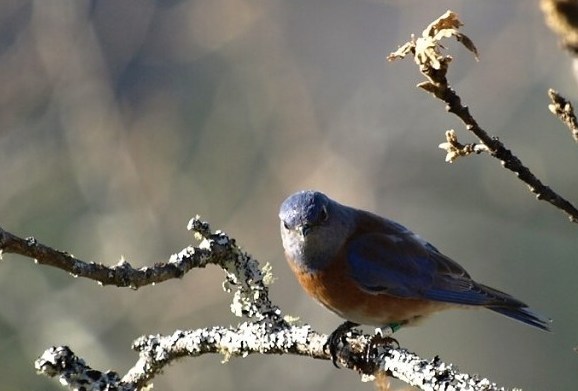 A male Western Bluebird searches for insects in Mt. Tzuhalem Ecological Reserve in the Cowichan Valley in January, 2015. His leg band identifies him as a juvenile that fledged from a nest near Duncan in June 2014. Photo: Terry Wiley

It is amazing but true: some of the Western Bluebirds from our reintroduced population in the Cowichan Valley have opted to spend the entire winter on Vancouver Island rather than migrate to wintering grounds on the Washington and Oregon mainland, as expected. After receiving confirmed reports of a few birds in Duncan in November and then two birds in Metchosin in December, we began to suspect as much, but there could be no mistaking that the birds are overwintering here on the Island when a flock of as many as 14 Western Bluebirds were spotted at Mount Tzuhalem Ecological Reserve near Duncan in mid-January.

“It was so wonderful to see them…We didn’t really believe it at first, that there would be Bluebirds here in the middle of January. It was such a thrill,” said Terry Wiley, who sent in the report. Terry was hiking past the entrance to the ecological reserve when he spotted the small flock enjoying the warm, sunny weather. “[The Bluebirds were] below us, in the Oaks and on the ground feeding. They were very active so it was difficult to get an accurate count, but we were able to confirm eight individuals with several more in the flock…Possibly as many as 12-14.”

Fortunately, Terry had brought his camera along and was able to capture several great shots of the four closest individuals. By comparing banding records from last season’s hatched and released birds with the photographs, we can confirm that two of the males are juveniles that fledged from the nests of translocated pairs brought from Washington State last summer. With only the left legs visible in the remaining photographs, it is impossible to confirm the identity of the other two birds, but we can see that they are banded, signifying that they belong to the reintroduced population. 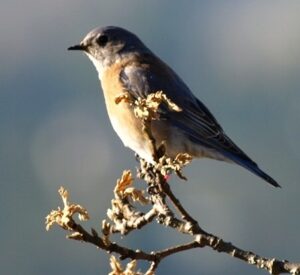 A female Western Bluebird basks in the sunshine on a warm mid-January day in the Cowichan Valley. Photo: Terry Wiley

The unseasonably warm winter is likely the cause of this altered behaviour, as project partners in Washington report that some of the Bluebirds from a large population south of Tacoma are also sticking out the winter there rather than migrating further south. What is less clear is how this will impact the recovery effort this year and in years to come, if the trend continues. Provided the Bluebirds can find enough to eat, they may have a better chance of surviving until spring to breed as they are spared the energy expenditures of migration.

This is where we can all play a part in the Bluebird recovery effort. Bluebirds are primarily insectivores, but will feed on berries to supplement their diet through the winter, when insect prey is scarce. By planting native fruit-bearing shrubs in our gardens and stewarding the native plant communities of public natural areas, we can provide much-needed food for Bluebirds through the winter. As we all know, healthy and diverse ecosystems are each species’ best hope for survival in a changing climate.

As for our overwintering Bluebirds, warden of the ecological reserve, Genevieve Singleton, reports that the flock has not been seen on Mount Tzouhalem since mid-January. However, the Bluebirds that did migrate last fall are expected to start returning in the next 3-6 weeks, so it is unlikely that the birds on Mount Tzouhalem would go far. Southern Vancouver Island and Gulf Island residents are encouraged to be on the lookout for Western Bluebirds (visit www.goert.ca/bluebird for identification tips) and report any potential sightings to bluebird@goert.ca or 250-383-3427.

For Terry Wiley, “it was a very special treat for us to see this flock and recognize that the project is working…very well.” Perhaps in the coming weeks others will be so lucky as to spot a Vancouver Island Western Bluebird – in the middle of winter.