Bluebirds in the Valley… Project Update! 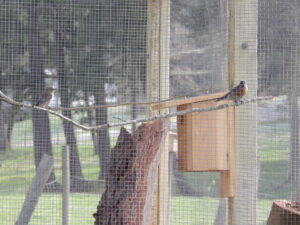 A pair of bluebirds brought up from Washington, at rest in their temporary aviary.

It’s been a very busy spring so far in Year 3 of Bring Back the Bluebirds!

Our technician, Jemma Green, has been busy surveying for returned birds, relocating released birds, caring for bluebirds in temporary aviaries, and providing supplemental feeding for those bluebirds that have already built their first nest of the season. In quick summary, right now we have 4 active nests (at least 12 eggs!), 2 pairs awaiting release, and 4 young male bluebirds in the Cowichan Valley.

So far this spring, we have found 8 Western Bluebirds returned to the Cowichan Valley from their winter migration, 3 adults and 5 juveniles. One of the juveniles gave Nanaimo birders a quick show for a few days before coming back down-Island to the area where he was hatched. Was he following the Mountain Bluebirds on their way to the Interior, or was he just checking out a new area before coming home? There have also been bluebird sightings in Metchosin this spring, perhaps as birds migrate through on their way up-Island. Local birders and members of the Cowichan Valley Naturalists’ Society have been our extra eyes (and ears!) on the look-out for bluebirds throughout the region.

Our big news is that the adults returned to the Cowichan Valley have nested again in the same nestboxes they used last year, near the Cowichan Garry Oak Preserve in Maple Bay. One pair has 7 eggs in their nest, the most that Western Bluebirds are ever known to lay: proving that we have some great bluebird habitat remaining in the valley, if we take care to provide nestboxes and protect oak ecosystems. 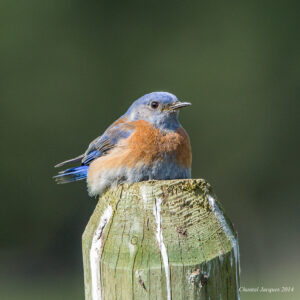 This male Western Bluebird was in Metchosin in March.

We’ve also brought up 6 adult pairs from Washington already this season. Four of those pairs have already been released from several properties around north Quamichan Lake. We’re thrilled that 2 of those pairs have established breeding territories and built nests! One pair is incubating 5 eggs right now, and we believe the other pair is still laying eggs.

We’ll be releasing 2 more pairs of adult bluebirds later this week. They may show up anywhere in the area, but nestbox hosts near Townend/Roome Road, along Stamps Road, and the Lakes / Herd Rd areas should especially watch for flashes of blue. Tips for identifying bluebirds are in the Bring Back the Bluebirds section of our website. Please report any sightings as soon as possible to the bluebird hotline, 250 383 3427, or directly to Project Technician Jemma Green at 250 220 1648.