Bring Back the Bluebirds Fundraiser

in categories Back to Our Roots project 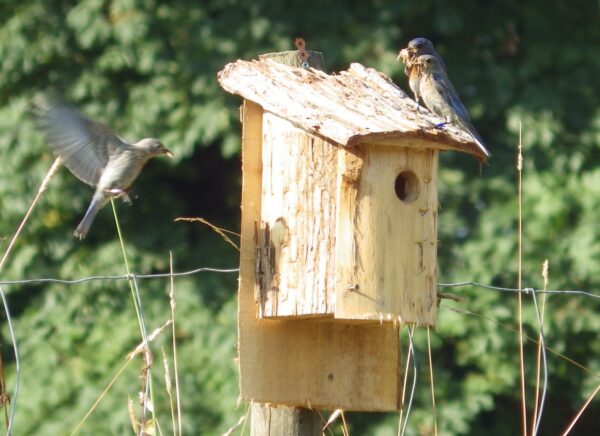 Reintroduced Western Bluebirds and their offspring are beginning to return to the Cowichan Valley from their wintering grounds for another breeding season. Although the population continues to grow year by year, it is still small and vulnerable – and in need of continued support.

As a non-profit organization, GOERT relies on private donations to make our species recovery work possible. For 2015, donations are needed to continue the translocations of breeding pairs that will sustain population growth through this critical stage. We hope to raise $15,000 for Bring Back the Bluebirds before the breeding season begins in April so that we can continue to reintroduce bluebirds, work with landowners to install nestboxes and improve habitat, and monitor the population throughout the year.

Studies have shown that at least 90 adult Bluebirds must be released for the reintroduced population to be viable. The good news is that we are more than halfway there. Since 2012, 44 adults and 34 juveniles have been released, with more and more juveniles hatching on Vancouver Island each year. With the support of our members, we can build on 3 years of success to restore a large, self-sustaining breeding population of Western Bluebirds to their historic Garry Oak habitats of southwestern BC.

Please consider supporting our efforts to restore this flagship species of rare and endangered Garry Oak ecosystems. Donations can be made easily and securely by visiting the ‘Bring Back the Bluebirds’ campaign page on www.canadahelps.org.