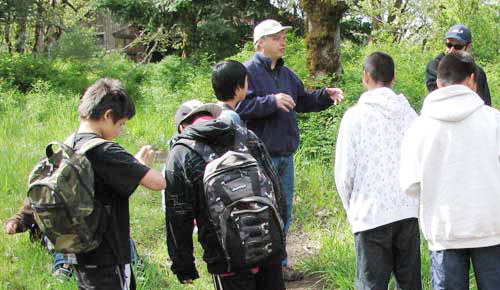 As part of our outreach to First Nations and local governments that have Garry oak-associated species at risk on their land, GOERT offered a field trip to Cowichan Tribes members and students last May. It was a follow-up to a classroom presentation that GOERT Outreach Specialist Carolyn Masson and Board Chair Matt Fairbarns had delivered earlier that spring.

Thanks to the great organizing skills of the Cowichan Tribes staff, about thirty Quamichan Middle School students grades 7-9 and about sixty youth and adult students from Cowichan Tribes schools (youth from Quw’utsun Hu-yi’xwule’ Skoulew’t-hw and adults from Yathuy’thut) attended. Everybody jumped into two school buses and arrived at Cowichan Garry Oak Preserve (owned by the Nature Conservancy of Canada, NCC) for a morning tour. We were greeted by NCC staff Tim Ennis, Irvin Banman, and Colin Ellder, who led groups to three sites. At each site there were additional facilitators waiting: Cowichan Tribes leaders Doug August, Ken Elliott & Fabian Tommy, along with Matt Fairbarns, who is a rare plant expert. 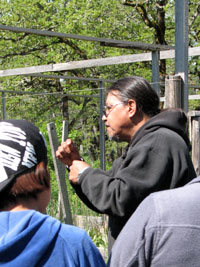 The three sites gave students hands-on experience of a Garry oak meadow, a native plant nursery, and the largest Garry oak tree in Canada. On the walk through the meadow, which was in full bloom, participants learned about camas, shootingstars, sea blush, western buttercup, spring-gold and a garter snake. At the nursery where native plants are being grown (including Endangered and Threatened plants like deltoid balsamroot, Howell’s triteleia, and yellow montane violet), Ken Elliott spoke about Cowichan Tribes uses of the plants, and one girl got to dig up a camas bulb from the garden bed with a yew digging stick.

At the big Garry oak tree, Doug August spoke about his ancestry and the importance of knowing the native plants of the area including the medicinal plants, and he spoke about the traditional practices of digging camas, and the way the people used to travel from village to village via the waterways. He taught participants how to say the Hul’qumi’num word for ‘camas’. 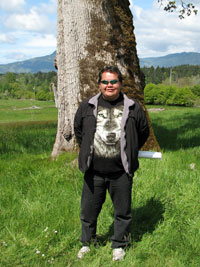 Everyone enjoyed lunch on the grounds. The Quamichan students went back to the big tree and sat down under it while they ate. After some difficulty gathering back into the two school buses, the participants were off to Somenos Garry Oak Protected Area for the afternoon. Again they broke into three groups and headed off in different directions to walk through the meadow and down along the creek, discussing native plants and invasive species. They gathered together to say good-bye at the end of the day and hope to make it an annual event. 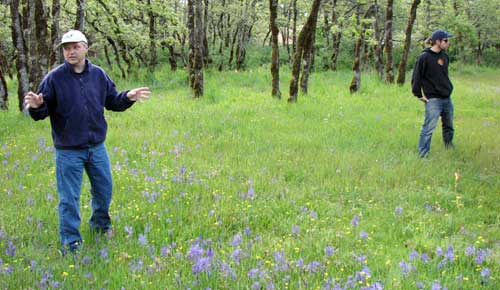 Matt and Tim interpret a Garry oak meadow for participants

Many thanks to the funders of this worthwhile workshop: The Real Estate Foundation of BC, Vancity, Parks Canada, and the Habitat Stewardship Program for Species at Risk. And thanks to all who participated!