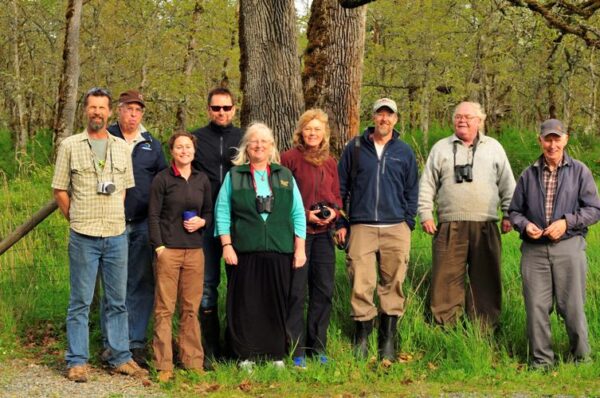 Tom and Syd (photo right) at the first bluebird release in the Cowichan Valley, May 2012 (photo: T. Ennis, NCC) 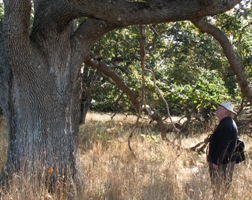 A great man with a great tree

We were very saddened last week to learn of the death of Tom Gillespie. Tom was a founding member of the Garry Oak Meadow Preservation Society, a dedicated volunteer for an astounding number of local conservation groups, and a large part of many GOERT initiatives. 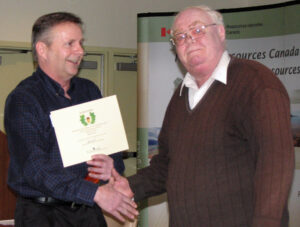 Trudy Chatwin, Chair of our Vertebrates at Risk RIG, says, “I will remember the times with Tom surveying for Vesper Sparrows, banding Purple Martin nestlings, travelling to Fort Lewis to see the bluebird program there, attending the second release of Western Bluebirds to the Cowichan Valley, and latterly enjoying the summer GOERT barbeque at Swan Lake. His energy and quiet help to all of our conservation efforts will be missed.”

Tom stopped by our office one day quite recently to visit and to discuss some fundraising ideas for the bluebird project. He was a thoughtful, generous, and gentle soul. The birds will surely miss him, as will we all. Read about Tom’s Acorn Award, presented last year, and his obituary. The Rocky Point Bird Observatory is hosting a memorial for Tom in mid-December. 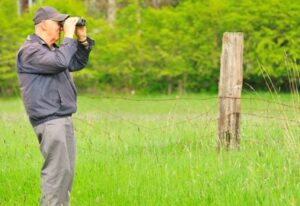 ‘Never stop birding’ could have been Syd’s motto

This summer we also lost Syd Watts, life-long mountaineer, naturalist, birder, and an early inspiration for our Bring Back the Bluebirds project. After working tirelessly to protect Mt Tzuhalem Ecological Reserve, Syd watched the last known nesting Western Bluebirds on Vancouver Island using a nestbox placed there by the Cowichan Valley Naturalists, of which he was a long-time member. Learn more about this exceptional man from the Friends of Ecological Reserves article, a mountaineering book biography, and his obituary. Syd’s protegee Genevieve Singleton tells us one of his last smiles was when she told him that bluebirds fledged in the Cowichan Valley last summer returned to nest there this spring.

In May, 2012, Tom and Syd were delighted to be part of releasing the first pair of bluebirds in the Cowichan Valley. GOERT’s Conservation Specialist Kathryn Martell spent the earlier part of that day mounting nestboxes with Tom at several sites around the valley. Syd was so busy bird-watching at the Cowichan Garry Oak Preserve that we could hardly get him to join the group for the picture!

Tom and Syd were stalwart defenders of nature whose presence will be sorely missed.