Following my second year of Environmental Sustainability studies at the University of Victoria, I was offered the incredible opportunity to join the Garry Oak Ecosystem Recovery Team Society (GOERT) as the Bring Back the Bluebirds project Conservation Assistant, supported by the Canada Summer Jobs program. This valuable experience in my field of study has opened my eyes to the world of in-the-field conservation.

I first began working on environmental initiatives in 2013 at the Cowichan Estuary and now serve as an active board member of the Cowichan Estuary Restoration and Conservation Society. I have always had an interest in endangered species, as well as the avi-fauna of the Cowichan Valley, here on Vancouver Island, but this summer working with GOERT to re-establish a population of the extirpated Western Bluebird has fueled this interest, turning it into a passion.

A ‘day in the life’ of a Western Bluebird Conservation Assistant varies from one day to the next, covering everything from cleaning out bird boxes to assisting with the banding of the latest brood of bluebird nestlings. With the position offering so many different shoes to fill, it is very difficult to pinpoint just one favourite moment or aspect of the job. Nevertheless, there are a few that stand out in my mind. 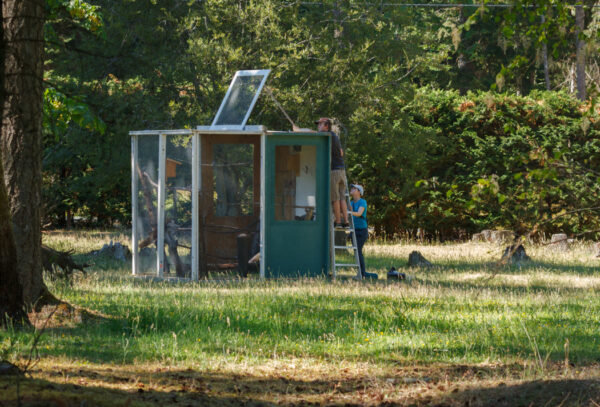 The moments that offered the most excitement are times that will always stay with me, including the discovery of a translocated breeding pair’s newly built nest after they were released, or the first sighting of a previously undetected bluebird. Assisting the Western Bluebird Field Technician, Reanna Shelling, with banding the nestlings throughout the season was also an interesting and fulfilling experience. Getting the opportunity to release Western Bluebirds alongside bluebird conservation veteran, Gary Slater, and watching them take to their new valley home was very rewarding, giving me a real sense of accomplishment. 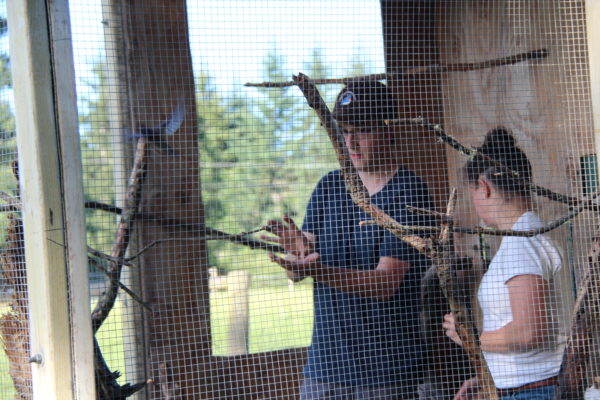 Ryan and Ecostudies Institute biologists release a newly translocated pair of bluebirds into their temporary aviary in the Cowichan Valley. Photo: Christa LeGrande

Over the past few years, I have become involved in hobby photography of birds and other subjects, so spending so much time amongst the bluebirds has given me ample chances to photograph the birds in their natural habitat. Along with becoming the ‘project photographer’, I was charged with deploying GOERT’s first-ever wildlife camera, which was initially set up inside an aviary nestbox to capture footage of the translocated nestlings and allow us to monitor their development. Then, over the course of summer, the camera was mounted in front of two more nestboxes, first to capture the parents bringing food to the box and the second to try to capture the nestlings fledging. Due to my previous technical experience working with photography and video I was able to take on this project, ending up with some unique and engaging videos (view them here [external site]).

I would like to take this opportunity to thank the Canada Summer Jobs program, Project Coordinator Jemma Green, our intrepid Field Technician Reanna Shelling, Gary Slater of Ecostudies Institute, and Cowichan Valley Naturalist Society’s Genevieve Singleton, and the many other amazing volunteers for helping to make this season such a success, and my time as a summer student so memorable.

It is never easy to give a definitive answer when asked “What’s in store for the future?”; however, I plan to carry on in the conservation and sustainability realm, though where that will land me in five, ten, twenty years’ time is an unknown – though that is part of the fun!