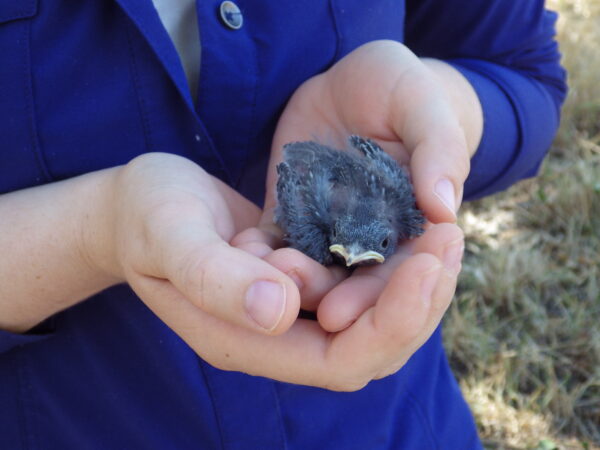 The arrival of autumn marks the end of another successful breeding season for the Cowichan Valley-based Bring Back the Bluebirds Project. Although once common in the region, Western Bluebirds had disappeared from Vancouver Island and the southern Gulf Islands by the mid-1990s. Bring Back the Bluebirds is part of an international, multi-partner initiative to re-establish a population of this migratory species in the Salish Sea area.

This spring, the efforts of project partners were rewarded when two of last year’s successful breeding pairs returned to their nest territories from their wintering grounds, along with several of their young. “That’s a great sign of success for the growing population,” says Jemma Green, Garry Oak Ecosystems Recovery Team Project Technician. “Three of the returning adults were released here in the past 2 years, after being captured from a healthy population in Washington. To have both previous years’ released adults and Cowichan-hatched juveniles returning to the area gives us great hope that we can restore this iconic bird of endangered oak ecosystems.” To further boost the breeding population, nine more bluebird pairs were released this summer, as has been done in 2012 and 2013. 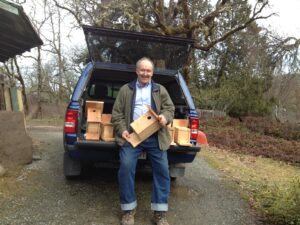 A record 52 juvenile bluebirds were raised in the Cowichan Valley this year. This success would never have been possible without the involvement of local organizations and individuals who volunteered their time to support all aspects of the project, from fundraising to the construction of bluebird nestboxes and aviaries. The project also relies heavily on coordinating with local landowners to install and monitor nestboxes on their own properties and to host the temporary aviaries from which new bluebird pairs are released each spring.

“The Cowichan Valley Naturalists provide core volunteer support,” Green continues, “volunteering with technical aspects of the project such as helping us feed and monitor nesting bluebird families, and surveying for roaming bluebirds so that we know where their territories are.”

Local fundraising efforts were ramped up this past May when Genevieve Singleton , member of the Cowichan Valley Naturalists Society and community liaison for the Bring Back the Bluebirds Project, along with fellow CVNS member Gail Mitchell, organized the first ever Bring Back the Bluebirds fundraiser, which took place at the Cowichan Bay Pub. Through ticket sales, live music provided by Bryon Clayton Thomas and the Paul Ruszel Trio, a raffle, and live and silent auctions, CVNS members were able to raise over $ 3,500 towards the project.

The event was a success both for the community and for the project. “I appreciate all the hard work done by the volunteers and the warm response from our community to help the iconic bluebird return to the Valley,” said Genevieve afterwards. “The involvement of local naturalists is critical for this ambitious project,” adds Green. “This is everyone’s chance to be part of a good-news conservation story and take an active part in species recovery.”

As the bluebirds head south following the project’s third breeding season, Singleton is hoping to build on existing community engagement as the partners look ahead to the 2015 breeding season and beyond. “We need dedicated environmental stewards to monitor and maintain the reintroduced bluebird population once it’s established,” she says. “We have a vision of the local community helping the population thrive. There are always roles for new volunteers.”

Meanwhile, Green reminds us that the bluebirds could stick around until the end of October before heading south to their wintering area. Please report bluebird sightings to 250.383.3427 or bluebird@goert.ca. To learn more about the Bring Back the Bluebirds project, visit the Bluebirds website section.

Bring Back the Bluebirds is led by the Garry Oak Ecosystems Recovery Team (GOERT), in partnership with Ecostudies Institute, the Nature Conservancy of Canada, the Province of BC and the Cowichan Valley Naturalists’ Society. Funders for this year include: the Baillie Fund, EcoAction, Habitat Conservation Trust Foundation, North American Bluebird Society, TD Friends of the Environment, Parks Canada Agency, Public Conservation Assistance Fund, Vancouver Foundation, and private donors.

Download a PDF version of this media release here (440 kb).