Additional Garry oak habitat on Mt. Tzuhalem will be protected

July 29, 2009 – Success! The Nature Conservancy of Canada (NCC) has been successful in its fundraising campaign to save an important piece of Mt Tzuhalem in the Cowichan Valley. The 100-acre (40-hectare) Chase Woods contains globally-endangered Garry oak woodlands, dramatic cliffs from which peregrine falcons soar, and is crowned by the cross that perches above the bay. NCC was successful in raising the required funds by the July 24th deadline and will soon make an official announcement that the Chase Woods land has been protected. 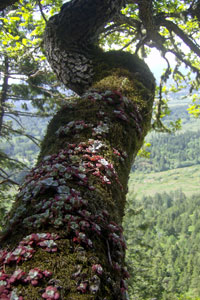 “I have spent half my working life keeping it like a park,” says David Chase, who bought the property in 1955 and has decided to pass it on as he approaches his one-hundredth year. “I’m out of gas, so it’s time for someone else to take care of the land.”
Some Garry oak habitat is already protected on Mt. Tzuhalem in the Mt. Tzuhalem Ecological Reserve.
For more information
Read more and see downloadable map at the NCC website.
Phone 1-888-404-8428 or email bcoffice@natureconservancy.ca.