Sandra Bird is a retired veterinarian, farmer, and dedicated Bring Back the Bluebirds volunteer living near Somenos Lake in Duncan. She has been a bluebird nestbox host since 2013 and monitors both her own nestboxes and those of her neighbours. We were very fortunate to have Sandra’s support when multiple bluebird families decided to settle in her neighbourhood this spring! Here, Sandra shares her experience working and living amongst bluebirds:

Everyone in our family and our neighbours were very excited every time we saw bluebirds. The men would come in from haying talking about how many bluebirds they had seen in the field. One neighbour up the road called to say they had seen a bluebird at their birdbath. I got to feed them for several days when GOERT’s field technicians were away.

They are such beautiful birds and so interesting. They were quite accepting of people being close to them. The way the older offspring from a previous hatching helped to feed the newest babies was fascinating. They even accepted stray bluebirds into their family group. As you may have guessed, I spent a lot of time just sitting in the field watching the birds and my farm animals too. 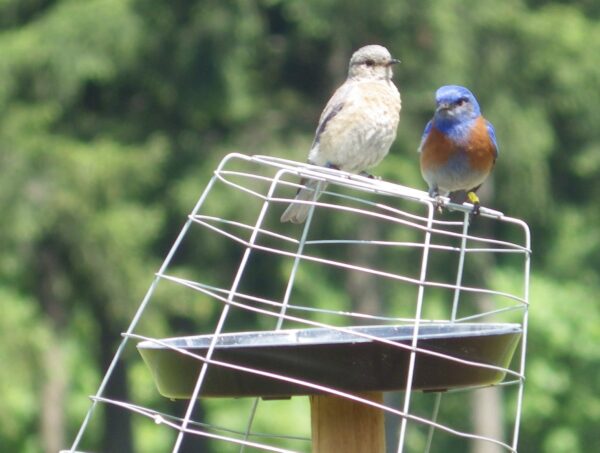 The highlight of the summer was helping to band baby bluebirds. Only one technician was available on the day the birds were to be banded (timing is critical), so my neighbour and I were asked to help. Reanna took half of the babies from the nest and put them in a soft drawstring bag. She left some in the nest so the parents would not get too upset. Each baby was taken from the bag individually, measured, sexed, and banded with four variously coloured bands in an assigned pattern. My neighbour and I got to hold the birds while they waited to be banded. The birds didn’t seem to mind the handling and it was amazing to be able to touch them and see them so closely. As my neighbour said, it was a privilege.

The fieldwork ended while the last bluebird family still needed to be fed, so I got to do that for a few days into September. Some mornings they would be waiting on the feeder for me. Other mornings there would be no sign of them and I would be worrying that some disaster had happened, but as soon as I put the worms out they would appear, sometimes up to six at a time. The new fledglings were so funny when they started coming to the feeder instead of waiting to be fed. They would plunk themselves down right in the feed container and stuff themselves.

As of the first week in October, we are still seeing bluebirds around. It will be interesting to see how late they stay here and how many come back in the spring.