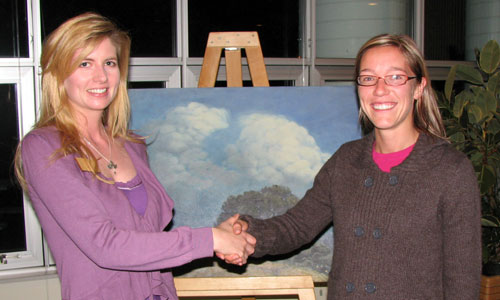 The Garry Oak Ecosystems Recovery Team (GOERT) announced a four year contribution agreement with Parks Canada Agency last night at their Annual General Meeting. This agreement provides a total of $852,500 over four years to support the charitable society’s work to protect and restore habitat for species at risk.

In all of Canada, Garry oak and associated ecosystems occur only on southeastern Vancouver Island (Victoria area to the Comox Valley), on the Gulf Islands, and in two isolated areas in the Fraser Valley. Today, only around one per cent of the natural ecosystem remains in the Capital Regional District and five per cent overall. These ecosystems are a hotspot for biodiversity, with at least 1600 native plants and animals dependent on the habitat. Of these, 116 species have been assessed as either provincially rare or nationally at risk of extinction.

GOERT is a charitable organization dedicated to the recovery of Garry oak and associated ecosystems in Canada and the species at risk that inhabit them. The team was formed in 1999 as a comprehensive partnership of experts affiliated with all levels of government, non-governmental organizations, academic institutions, First Nations, volunteers and consultants. In 2007, the organization was incorporated as a non-profit society in BC and became a registered charity in Canada in 2009.

“Parks Canada is proud to continue its support of an existing partnership with the Garry Oak Ecosystems Recovery Team that commenced nine years ago” said Nicole Kroeker, Ecosystem Scientist with Parks Canada. “Parks Canada is one of three federal partners responsible for the delivery of recovery planning documents under Canada’s Species at Risk Act. As part of this agreement, GOERT will assist Parks Canada in meeting its legal obligations under the Act by drafting recovery planning documents for species at risk in Garry oak and associated ecosystems.”

“This multi-year support from Parks Canada gives us assurance of funding for some of our key programs over the next few years and will help us to secure funding for additional programs” said Shyanne Smith, Program Manager for GOERT. “This funding will support increased collaboration with partners on restoration and species at risk protection, and increase our ability to deliver information and educational programs on the values of and threats to Garry oak ecosystems in Canada. It will also boost our capacity to develop recovery planning documents for species at risk.”
For more information about the Garry Oak Ecosystems Recovery Team, please visit www.goert.ca.

Note: Artwork on display in the above photo was provided by Ken Campbell, of Imagecraft Studio in Victoria. Ken kindly offered to donate 30% of art sale proceeds from the Annual General Meeting to GOERT.