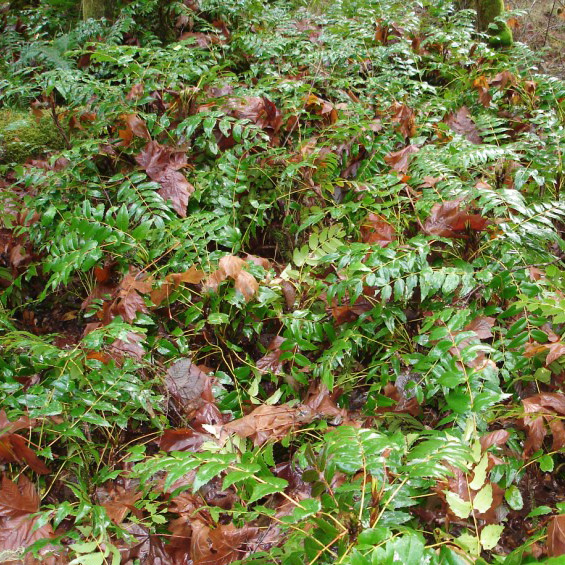 An erect evergreen shrub reaching 60 cm tall. Compound leaves resemble holly and are clustered at the base, with nine to nineteen leathery and spiny leaflets that turn purplish in winter. Flowers are bright yellow racemes, becoming edible berries with large seeds and a whitish bloom (Pojar and MacKinnon, 1994). Photo by Carolyn Masson.

Mesic to dry open slopes and open forests in the lowland, steppe and montane zones (Douglas et al., 1998). Dry to fairly moist, open to closed forests at low to middle elevations (Pojar and Mackinnon, 1994). Scattered to abundant, occasionally dominant in the understory of semi-open forests (persists on cutover sites) on water-shedding sites (Klinka et al., 1989). Can grow in the understory of 300-600-year-old forests and in open meadows and recent clear cuts (Tirmenstein, 1990).

Understorey dominant in early seral stages after low-intensity fires but persists into later seral stages because of its ability to tolerate shade (Tirmenstein, 1990).

Useful for erosion control and site stabilization because of its rhizomatous habit and wide range of shade tolerance (Minore et al., 1996).

Can be used to make jelly. Roots contain an alkaloid (berberine) with anti-bacterial properties (Minore and Rudolf, 1996).

August - September. Fruit should be collected when berries are purplish-blue in colour.

Use gloves to collect berries or flail from shrubs onto cloths. Clean by macerating with water and allowing pulp to float off (Rose et al., 1998).

Seeds should be superficially dried and sown immediately or store in sealed containers at 2-4º C (Minore and Rudolf, 1996; Rose et al., 1998).

Sow immediately in 1.25 cm of soil, covered with 0.6 cm of sand, and stratify over winter under mulch. Spring-sown seeds should be cold stratified for six to ten weeks at 4oC (Minore and Rudolf, 1996).

Remove spines and leaves and treat with rooting hormone. Use 2:1 vermiculite:sand mixture in a cold frame (Huxley et al., 1992).