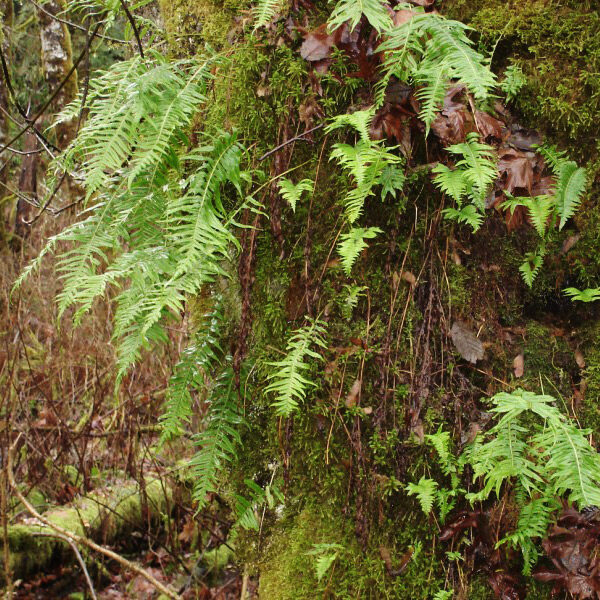 Small to medium sized evergreen fern to 70 cm tall (but often much smaller). Fronds grow from creeping, reddish-brown, scaly, licorice-flavoured rhizomes. Stipes straw-coloured, smooth, usually shorter than the blades. Blades to 50 cm long, once-pinnate; leaflets usually longer than 3 cm, with pointed tips and finely scalloped or toothed margins. Sori oval to round, with no indusium, in a single row on each side of the main vein (Pojar and MacKinnon, 1994). Photo by Dave Polster.

Epiphytic flora like licorice fern is important because it is a habitat niche for organisms. Licorice fern provides food for herbivorous insects and mammals (Nelson).

Some Aboriginal peoples chewed the sweet rhizomes for the flavour. Some groups ate the rhizomes steamed or broiled. Important medicine for colds and sore throats. They were also mixed with bitter medicines as a sweetener (Pojar and MacKinnon, 1994)

When ripe, spores will appear plump and red-brown to cinnamon-brown in colour. Cut fronds from the plant and place, sporangia side down, on a sheet of white shiny paper. Enclose this sheet in newspaper and place in a warm dry place until a fine brown powder can be seen on the paper. Collected spores can then be placed in a container, envelope or jar and placed in refrigerator.

It is best to store spores at 4º C in an air-tight screw-capped vial. For the spore to germinate, it must be kept moist at all times. With increasing spore age, the percentage of viable spores decreases, with an increasing delay in germination. Immediately after collection, spores germinated at about 89.6%, while after four years of storage, germination declined to 53.7% (Kaczynski, 2005).

Spores do not need dormancy breaking, and can be sown as soon as they are ripe (Kaczynski, 2005).