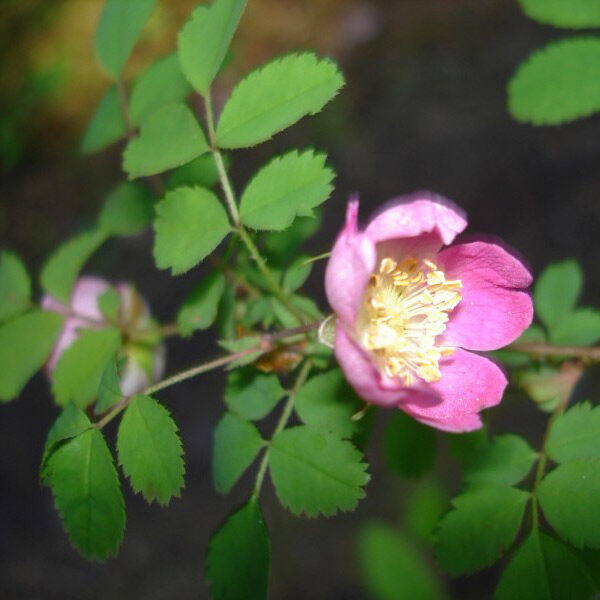 Spindly shrub, to 1.5 m tall, with slender stems, usually with numerous soft, straight (not curved) prickles, sometimes unarmed especially on younger stems, which are usually covered with stalked glands (needs hand lens). Leaves alternate, deciduous, compound with an odd number (five to nine) of toothed leaflets; leaflets 1-4 cm long; stipules present at the base of each leaf. Flowers small (1-2.5 cm across), pale-pink to rose; five petals, numerous stamens, usually solitary (not clustered), or occasionally in twos or threes, at the end of branches. Fruits orange to scarlet, pear-shaped ‘hips’, 6-10 mm across, without attached sepal lobes which fall away from the fruit early, leaving the end of the ‘hip’ uniquely bald; ‘seeds’ are bony, hairy achenes (one to seven per hip) (Pojar and MacKinnon, 1994). Photo by Dave Polster.

Found in a variety of habitats from open wooded, to dry to moist, at low to middle elevations, from the coast of southern BC to the Kootenays, Vancouver Island, and south to California. ) (Pojar and MacKinnon, 1994).

Good potential as a reclamation species because of drought tolerance and value to wildlife.

Delicate specimen if grouped; somewhat scraggy as single plants. Pale pink to rose blooms. Bluish tint to leaves. Use as a hedge or in a shrub border (Grant and Grant, 1967).

As with all species of wild rose, in spring, the tender shoots were sometimes eaten. A pleasant tea can be made from the young leaves and twigs and was drunk as a tonic. A decoction made by boiling branches or strips of bark was used also as an eyewash for sore eyes, for cataracts or to enhance eyesight. The Makah mashed the leaves as a poultice for sore eyes and any type of abscess. The chewed leaves were applied to bee stings, and the ripe hips were steeped, mashed and fed to babies with diarrhea. Leaves and bark were dried and toasted, and the resulting powder was smoked. Baldhip rose was used for protection for dance initiates, young people at puberty or relatives of the deceased. As with several rose species, hips were eaten sparingly when ripe by many northwest coast groups, including the Cowichan, Saanich, Ditidaht, Nuu-chah-nulth and Makah. The outer rind of the fruit only was eaten, because the seeds contain hairs that are irritating to the digestive tract, and are said to give one an “itchy bottom”. The hips were often considered a famine food. Branches of all species of wild rose – along with skunk cabbage leaves, fern fronds, pine needles, or salal – were sometimes put in steaming pits, cooking baskets and root storage pits. Cedar-root cooking baskets used for boiling foods often had rose leaves placed under and over food to flavour it and protect it from burning (Pojar and MacKinnon, 1994)

Spines of this rose were considered poisonous and thought to cause swelling and irritation if touched. Baldhip rose hybridizes occasionally with R. acicularis and perhaps with R. nutkana (Pojar and MacKinnon, 1994).

late May to mid-July

Soon after the hips change colour from dark green to reddish, hand collections may begin, and continue thereafter. Hips should be collected promptly - they disappear from the plants quite rapidly by bird and mammal predation - placed directly into bags. Gloves should be worn. If fruits are to be held prior to shipment to the processing plant, they should be placed in containers of cold water that must be changed at least every 24 hours, or placed in coolers at 2-5º C. If fruits are allowed to dry out, processing difficulties may arise, and overall germination may be decreased. Seeds collected shortly after ripening will be less dormant than those from fully dried hips. The seeds can be recovered by macerating the hips in water and separating the seeds by flotation; empty seeds and pulp will float. Seeds can be sown immediately, or be air-dried and placed in sealed jars for storage (1-4 years).

Store dried seeds in sealed containers at 2-5º C, but best sown in fall.

Freshly cleaned seeds that have not had a chance to dry germinate best. Stored (dried) seeds should be stratified at 1-3º C for 90 days. In spring, seeds can be broadcast or sown in drills. The generally recommended planting depth for rose seeds is 7-20 mm.