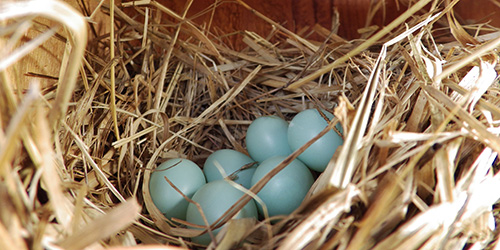 Six eggs in a Western Bluebird nest in the Cowichan Valley

For Immediate Release May 17, 2013
Duncan, BC – Western Bluebirds Lay Eggs in Cowichan Valley

These are exciting times for the Bring Back the Bluebirds Project. Year two is well underway, and on a farm at the north end of Quamichan Lake, there are eggs in a nestbox. The female of the breeding pair has laid seven eggs—an above-average clutch of eggs for an above-average bird.

This female is a member of the historic brood that was raised at Cowichan Garry Oak Preserve last summer—the first Western Bluebirds known to have hatched on Vancouver Island since 1995—and project followers were thrilled when she migrated back to her birthplace this spring with two of her siblings. Her mate was translocated to the area this spring from Washington. When he was released from his aviary, he split up with his original mate and formed this new pair bond.

And there are more signs of success: on Thursday when technicians visited the nestbox of a pair nesting near Somenos Lake, they found five eggs. Says Conservation Specialist Kathryn Martell, “The male was translocated this spring to a nearby property, and until now, his chosen mate has been a mystery. She is not the female that spent several weeks with him in the aviary. While she was perched on a low Garry Oak branch, we were able to see her leg bands with a spotting scope, revealing her identity: she was banded on San Juan Island last year and is the first immigrant to Vancouver Island’s new bluebird community!” Gary Slater of Ecostudies Institute notes, “This is the first evidence of dispersal and connectivity between islands, and emphasizes the importance of establishing multiple local populations in order to have a viable Western Bluebird population throughout the region.”

So far this year, six pairs of bluebirds have been translocated to the Valley; in the next few weeks, four more pairs, along with their nestlings, will make the journey. The families will be held in temporary aviaries until the young have fledged, then will be released into the wild. Volunteers from the Cowichan Valley Naturalists Society work with the project technician to track the released birds and monitor their breeding success and habitat use.

Cowichan Valley residents are asked to watch for bluebirds and report sightings immediately. Western Bluebirds are smaller than a robin; males have bright blue head, wings, and back, with rust-orange on the breast and parts of the upper back. Females are less brightly coloured. Photos showing coloured leg bands that the birds may be wearing (two on each leg) are most welcome. Report possible bluebird sightings to bluebird@goert.ca or 250-383-3427. To learn more about the Bring Back the Bluebirds Project, see www.goert.ca/bluebird.

Western Bluebirds are one of more than 100 species-at-risk in Garry Oak and associated ecosystems. Once common on Vancouver Island and the southern Gulf Islands, their population began to decline in the 1950s. Since 1995, they had not been known to nest successfully in this region (until this project began), and are considered extirpated (locally extinct). One reason for their disappearance is a lack of available nesting cavities due to loss of Garry Oak habitat, removal of standing dead trees, and competition with alien invasive birds: European Starlings and House Sparrows. Western Bluebirds are secondary cavity nesters, meaning that they cannot build their own nest cavities, and depend on old woodpecker cavities, natural holes in trees, or nestboxes.

Please report possible bluebird sightings to bluebird@goert.ca or 250-383-3427. To learn more about the Bring Back the Bluebirds Project, see www.goert.ca/bluebird.