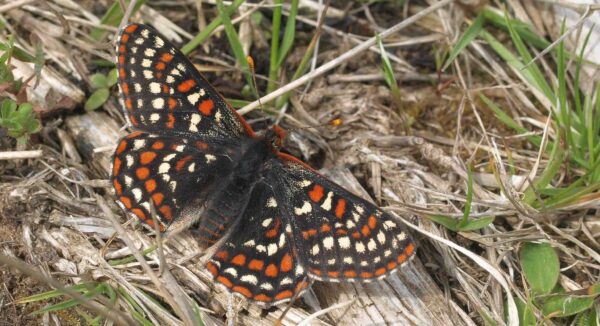 Our multi-faceted approach to Taylor’s Checkerspot recovery developed over several years, and is a cooperative effort that involves many partner organizations, landowners, biologists, wildlife husbandry specialists and volunteers that together have brought us to where we are today. While most of the on-the-ground recovery actions currently take place on Denman Island and are carried out by local residents, some of the project leaders, participants and advisors are from other areas of BC, the Yukon, Ontario, Washington and Oregon. The project continues to evolve and grow. We hope that the it will eventually spread to former Taylor’s Checkerspot sites in BC. The current key components of the project are:

Taylor’s Checkerspot habitat on Denman Island includes sunny, open areas such as fields, meadows and logged lots that have patches of bare mineral soil and wetlands.

Small pools and ponds that persist into the summer are required by the butterfly’s primary food plants, such as the native plant Marsh Speedwell (Veronica scutellata). 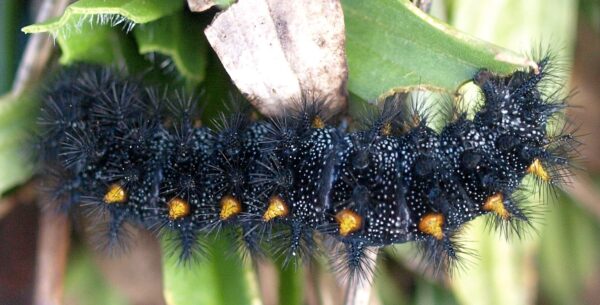 Many of the open areas that supported large numbers of TCBs a few years ago are growing in with shrubs (e.g. Scotch Broom), ferns, conifer seedlings and other vegetation. Left unchecked, this natural succession will eventually shade out the food plants for Taylor’s Checkerspot larvae. To restore and enhance TCB habitat, volunteers and contractors are removing tonnes of Scotch Broom, seedlings and other encroaching plants from key sites within Taylor’s Checkerspot habitat. 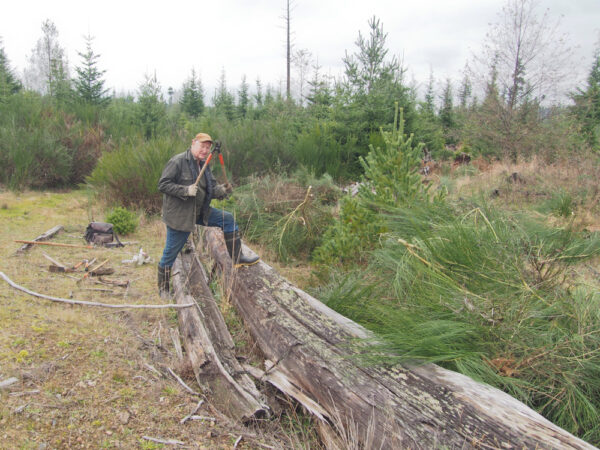 Volunteers and contractors are removing encroaching vegetation to reclaim clearings in the Butterfly Reserve area of Denman Provincial Park. Photo: A. Fyson

Our Invertebrates at Risk Recovery Implementation Group is developing a TCB habitat enhancement plan for Denman and Hornby Islands. We are hoping to establish new populations of the butterfly at sites off Denman Island. Watch this space and the local island newspapers for invitations for public input on the plans. 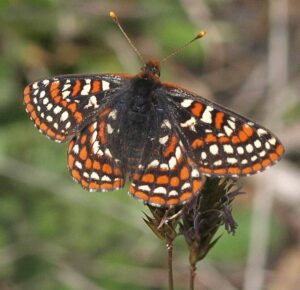 Project participants are tracking changes to TCB habitat and are conducting annual butterfly counts to monitor TCB population trends on Denman Island. The Taylor’s Checkerspot population has fluctuated since the discovery of 15 individuals in 2005, to an estimated peak of about 13,000 in 2009 (based on 1,089 marked and 44 recaptured), followed by a rapid decline to less than 100 individual butterflies observed each year recently. Surveys each year have not been consistent; however there clearly is a downward trend in population numbers.

The butterflies are dormant in the fall and winter, but if you spot Checkerspot larvae or butterflies (see Identification section) on your property in the spring or early summer, please contact Deborah Bishop (Taylor’s Checkerspot Community Working Group Co-Chair).  You may also wish to report the sightings and upload photos to the e-Butterfly website.

One of the project’s major initiatives was the creation of the Taylor’s Checkerspot Conservation Breeding Facility (a.k.a. the TCCBF Lab) in 2013. It was built on a private property on Denman Island, with capital and operating expenses funded by Wildlife Preservation Canada. Developed and operated under the direction of volunteer manager Peter Karsten, the facility and butterfly husbandry protocols were based on the successful Taylor’s Checkerspot Conservation Breeding program at the Oregon Zoo.

On May 23, 2013, a few members of the project team were fortunate to see a Taylor’s Checkerspot laying eggs on Narrow-leaved Plantain (Plantago lanceolata) and Thyme-leaved Speedwell (Veronica serpyllifolia) beside a horse paddock. 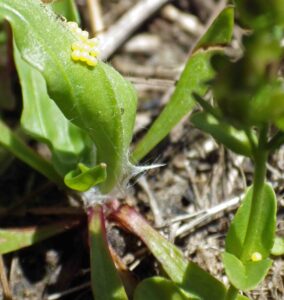 Eighteen of her golden poppy seed sized eggs were carefully collected and transferred to the TCCBF Lab. Thirteen hatched and progressed through their five larval instar stages before entering into diapause (dormant overwintering stage).

In the spring of 2014, 12 larvae woke up, pupated, and metamorphosed into adult butterflies. Additional specimens were collected under permit in Denman Island Provincial Park to broaden genetic diversity for the breeding colony. The butterflies were mated and produced more than 2,000 eggs! Not all of the eggs were fertile, and as in the wild, many were not expected to survive through all the life stages to adulthood. However, these were impressive results for the first year of operation of the Taylor’s Checkerspot Conservation Breeding Facility.

While some larvae were lost during rearing, many discoveries were made about food selection, food volume requirements and metamorphosis events, TCB life history and husbandry, that were used to refine and improve husbandry protocols. All but three of the adults were released (the others were kept for observations and future genetic research).

We saw a significant improvement in the spring of 2016, with more than 99% of larvae emerging from winter diapause. As a result, nearly 1,300 larvae were released into a butterfly reserve in Denman Island Provincial Park and Protected Area in March. 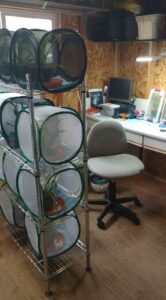 On April 1, 2016, Peter passed the conservation torch and 100 larvae to the Greater Vancouver Zoo who are taking over the TC conservation breeding program with continued support from Wildlife Preservation Canada the BC Ministry of Environment. Peter will continue to share his expertise as needed. In an email message to thank the many Denman volunteers who helped at the facility, collected food plants for larvae, and were part of the management board, he wrote, “It has been an unforgettable pioneering experience. We now have tested husbandry procedures and a strong zoological institution to carry on with the project. The future looks bright.” 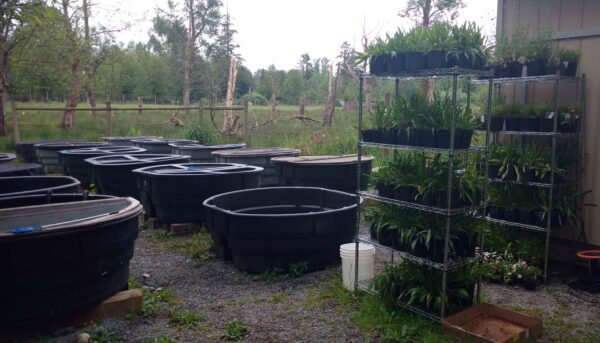 Long-term plans for expanding habitat restoration and enhancement activities to maintain or create other suitable TCB habitat on Denman and Hornby Island are being developed by GOERT’s Invertebrates at Risk Recovery Implementation Group (RIG). The plan will also consider the possibility of moving (translocating) Taylor’s Checkerspots to the most suitable sites on Hornby Island, Denman Island or Vancouver Island. The public will be invited to provide input on the draft plans. Notifications will be posted on this website and in local island newspapers.