Another sign of Spring – Taylor’s Checkerspot Butterflies are waking up! 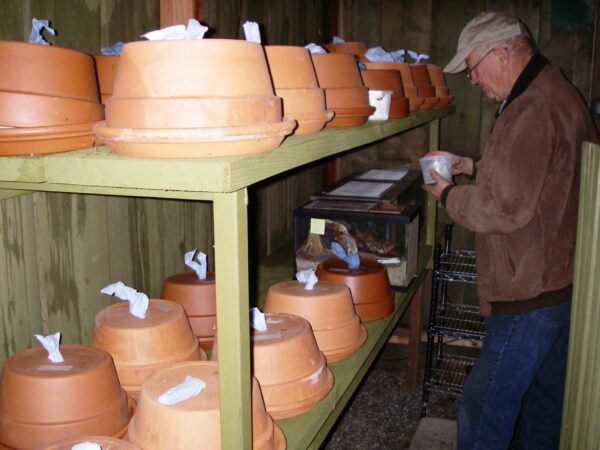 Our colony of larvae at the Taylor’s Checkerspot Conservation Breeding Facility (TCCBF) on Denman Island recently woke up from their fall and winter sleep which began at the end of August 2014. The long rest period is called diapause. The wake-up was expected around March 10th, but the warm and sunny weather got them up about two weeks early. This caused a big rush to get the Facility ready to move them from the “Diapause Palace” to the rearing room. The Diapause Palace is a cool, north-facing room with outdoor temperatures. The larvae sleep curled up in paper towels that line cups under large clay pots. The cups are checked regularly for larval activity at this time of the year. 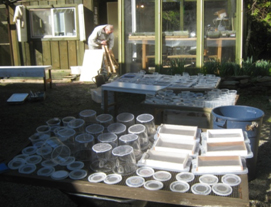 Spring cleaning – the TCCBF and containers were meticulously cleaned before moving the larvae from the “Diapause Palace” to the rearing room.

Four volunteers rolled up their sleeves to wash and/or paint the rooms of the Facility, disinfected some 40 bins, over 200 cups plus lids, and utensils. Luckily the sun came out to dry them on wire mesh racks. Then all the larvae were removed from their old bedding of paper towel, checked for survival and health, counted and placed in clean cups with fresh leaves of Marsh Speedwell (Veronica scutellata). Of the 414 larvae counted, only eight were dead. A survival rate of over 98% is a good outcome, and much better than can be expected in the wild. However, there is a wide range of body weights (from 16 to 75 mg, with a colony average of 30 mg so far), and some larvae may not feed and grow. 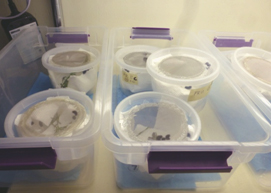 Post-diapause larvae bask and move around after they wake up. 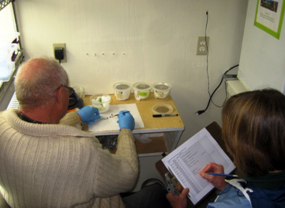 The weight of each post-diapause larva is recorded 2-3 times per week.

The larvae will be fed daily and weighed 2 to 3 times per week. They will spend most of their day feeding, digesting their food and basking in the artificial sunlight. Naturally, they will produce excrement, called frass, which means that the cups and liners must be replaced daily. Fresh food plant leaves are offered every day. The larvae also feed on Ribwort (Plantago lanceolata) and Thyme-leafed Veronica (Veronica serpyllifolia). The healthiest larvae will multiply their body weight by about 10 times by the end of April and then turn into pupae. Two weeks later the butterflies emerge and mate. The females lay up to 500 eggs. Their adult life as butterflies is short – not much more than 2 to 3 weeks.

We will provide more TCCBF news as time goes by.