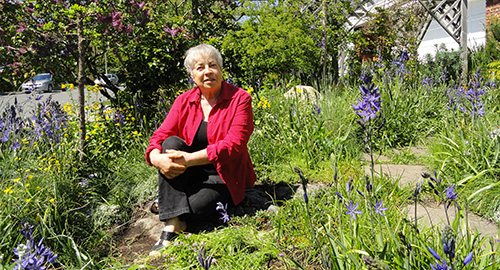 May 2013: It gives us great pleasure to recognize our former Executive Director Louise Goulet with an Acorn Award for all her contributions to Garry Oak ecosystems recovery. Louise is a born naturalist and has been interested in biology all her life, starting as an adventurous child and teenager who, with her siblings and friends, continually explored fields and woodlands, and the seaside and marine waters of the St. Lawrence River near her home in Rimouski, Québec. Her amazingly accepting mother had to live with Louise’s copious collections of rocks, insects, plants, tadpoles, fish and snakes, not to mention various pets, numerous scratches, and broken eyeglasses. Says Louise, “It is surprising that I survived those early years—for example, taking a 5-foot dinghy in high-current cold waters to an island four miles offshore, with two brothers rowing and two sisters continually bailing, is not recommended for anyone.” We’re happy to say that she did survive to go on to become a field biologist. 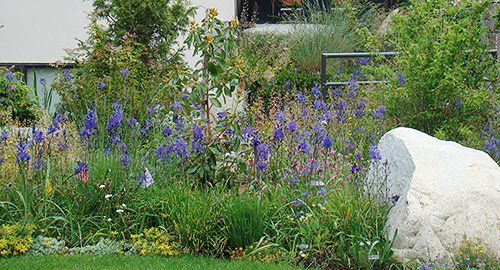 College diploma and one suitcase in hand, Louise left for Québec City to complete her Biology baccalaureate at Laval University. Louise funded her studies by mounting plants for a herbarium on weekends during the school year, and collecting insects in the summer in various parts of Québec, including Hudson Bay. Loans and scholarships, along with good doses of youth and naivety, helped her get through as well.

“A similar scenario followed when I moved to Simon Fraser University in BC to (quickly!) learn English and complete my doctorate in wildlife biology. I have great memories of living in a small trailer with a Siamese cat, pet badger, and younger sister and brother in the middle of Alberta’s dry short-grass prairie while studying the behaviour and population numbers of the Richardson’s ground squirrel.” 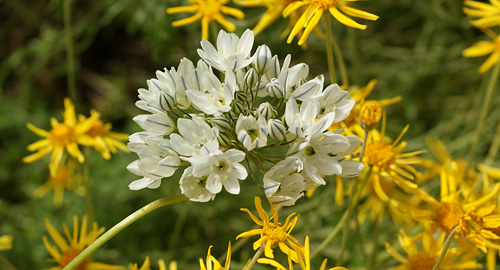 Then for almost 30 years, Louise worked in several fields:

Then for the next 10 years, Louise worked:

Since retiring, Louise has become involved in many Garry Oak-related initiatives:

“All these years, I’ve lived and worked by the motto ‘I never want to say, I wish I had . . . ’, always striving to learn, achieve, and live life to the fullest while being kind to others. Now that my husband Michael is also retiring, we will be spending more time traveling (Dempster Highway, Amazon, Galapagos, here we come!) and continuing to learn languages.” Still, Louise has assured us that she will keep some of her free time to contribute to the survival of the native species associated with Garry Oak ecosystems.

Species at Risk Outreach Specialist Chris Junck adds, “Louise has contributed generously to GOERT over many years, first as our Executive Director, and then as a volunteer member of our Native Plant Propagation Sub-committee. She has been extremely good to us and many others, providing hundreds of plants for restoration projects, seeds to give away at events, and her considerable expertise.”

A sincere thank you, Louise, for all of your contributions to the recovery of Garry Oak ecosystems and species at risk.