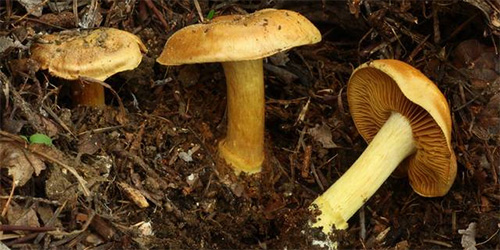 Victoria mycologist Oldriska (Oluna) Ceska has been surveying the fungi of Observatory Hill since March 2004. Her full annual reports since 2008, including photos, can be downloaded at the bottom of this page. Oluna can be contacted at aceska@telus.net.

a study by Oldriska Ceska (photos by Adolf Ceska)

Observatory Hill (also known as Little Saanich Mountain) is a hill on the outskirts of Victoria, BC, Canada, elevation 224 m. In 1913, Canadian astronomer J.S. Plaskett selected this hill as the site for a large, 1.83 m telescope. Dominion Astrophysical Observatory and the telescope were completed in April 1918. For about two years the telescope was the largest in the world. Later, the top of the hill was developed into an astronomical research and educational facility. Since 1975, the Dominion Astrophysical Observatory has been one of the sections of the National Research Council’s Herzberg Institute of Astrophysics (NRC/HIA).

Observatory Hill near Victoria, BC

The research facilities are clustered on the top of the hill, and relatively large areas have been left undeveloped in order to provide good conditions for astronomical observation.

The plant communities that remain on the hill are typical of the Coastal Douglas-fir Biogeoclimatic Zone. The drier western and southern upper slopes are open rock outcrops with a mosaic of mossy/grassy vegetation and several stands of Garry Oak, with scattered clusters of arbutus. On the top of the hill there are remnants of an old-growth Douglas-fir forest, rare on southern Vancouver Island.

There has been no detailed study of the plant communities of Observatory Hill with the exception of Hans Roemer’s work. Dr. Roemer included 10 vegetation sample plots from Observatory Hill in his Ph.D. thesis and has done additional studies of rare plant habitat on the western slope.

The western slope of the hill hosts several rare species of vascular plants, bryophytes, insects, and vertebrates. Many of them have been recorded in the Species At Risk Act (SARA) registry. Most of the rare species occur on the rock outcrops and in the Garry Oak stands on the western slope.

Recently, bryologists have been monitoring two rare bryophytes (Bartramia stricta and Entosthodon fascicularis) that have been discovered on the western slope of Observatory Hill, in addition to the uncommon Sphaerocarpos texanus and Targionia hypophylla. Not much attention has been paid to other parts of Observatory Hill, or to the fungi. Since 2004, however, the macrofungi have been collected and identified by Oluna Ceska.

In her macrofungi surveys, Oluna Ceska used the Intuitive Controlled Survey Method which calls for the qualified surveyor to conduct a survey of the area by walking through it and around its perimeters, and closely examining portions where target species are especially likely to occur. She endeavoured to cover all the possible habitats and substrates. Fungal surveys require repeated sampling throughout the season because many fungi exhibit ephemeral fruiting. Long-term surveys are needed in order to obtain a “complete” list of macrofungi from a given area. 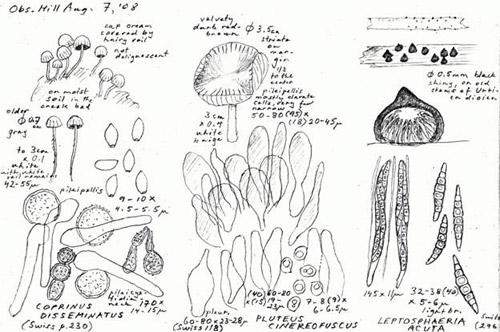 Each species encountered was recorded on each visit and specimens of those that needed microscopic examination for identification were collected. Selected specimens were photographed, preferably in their original setting. There are many photos in the full report. Follow-up laboratory work included sorting, identification and drawing, drying, and storing. It is generally accepted that 1 hour in the field requires 3-4 hours work in the lab.

From November 27, 2004 to March 31, 2013, Oluna made 290 collecting visits to Observatory Hill and recorded/collected about 1,166 species of fungi from an area of less than 75 ha. The species observed could be considered representative of the mycoflora of many similar sites in the Coastal Douglas-fir Biogeoclimatic Zone on southern Vancouver Island. Many species represent northern extensions of species otherwise known from more southern ranges and the preliminary study of the observatory Hill specimens has revealed at least one previously undescribed species.

Since July 2008, Oluna has provided Dr. Mary Berbee (UBC) with about 650 specimens of the genus Inocybe and 300 specimens of the genus Cortinarius for a DNA study that UBC is conducting in cooperation with Dr. P. Brandon Matheny (University of Tennessee) and Dr. Joe Ammirati (University of Washington, Seattle). About 20-30% of the study’s specimens have come from the Observatory Hill survey.

Results of each season’s work are summarized in an annual report that is submitted to the Dominion Astrophysical Observatory. The reports are available as pdf files below.

Observatory Hill has proven to be ideal for a long-term mycological inventory as it is protected to a certain degree, it is easily accessible and the size of the area is about as much as one mycologist can cover in an intensive season of field work. Oluna hopes that her work will be the beginning of long-term monitoring of the mycoflora of the Coastal Douglas-fir Biogeoclimatic Zone.

Please note: Observatory Hill contains sensitive habitat with species at risk. Please stay on designated trails unless you have obtained a research permit from the National Research Council.