Acorn Award September 2008: We are pleased to present Marilyn Fuchs with an Acorn Award for her outstanding contribution to the Garry Oak Ecosystems Recovery Team. Marilyn is one of the founders of GOERT, and was the founding Chair, and subsequently Program Coordinator and Vice Chair, from the Recovery Team’s inception in 1999 until January 2005. 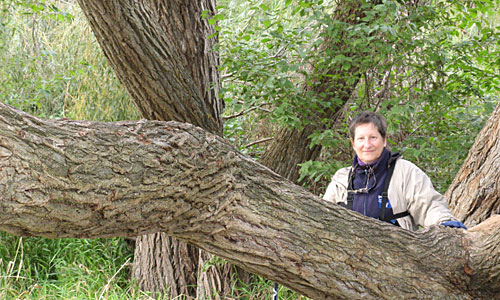 Chair Brian Reader says, “Marilyn played a pivotal role in the establishment and evolution of GOERT, and dedicated herself tirelessly to develop the organization and keep its pursuits true to the well-crafted recovery strategy. We overcame a lot of obstacles in our first six years (such as securing funding, hiring staff and overseeing multiple projects) in large part due to her hard work and dedication.”

When asked what she remembers about the early days, Marilyn says, “The time was right; there was synergy. GOERT emerged when people were ready for a coordinated effort to recover Garry oak ecosystems. Funding for work on species at risk was just becoming available, and Canada’s Species at Risk Act (SARA) was in the wings when we started.”
Marilyn wrote Towards a Recovery Strategy for Garry Oak and Associated Ecosystems in Canada: Ecological Assessment and Literature Review and drafted GOERT’s Recovery Strategy for Garry Oak and Associated Ecosystems and their Associated Species at Risk in Canada, 2001–2006.
“We were standing on the shoulders of giants — I appreciated the efforts of those who had gone before us, such as the Tallgrass Prairie and South Okanagan conservation initiatives, which were ecosystem and landscape-level initiatives. They had already written some documents which were helpful to me in drafting the GOERT Recovery Strategy, and I also interviewed people from those groups. I would like to acknowledge Joel Ussery and Richard Hebda, who worked with me to pull together the Recovery Team, along with members of the Garry Oak Meadow Preservation Society (GOMPS) who first raised the profile of Garry oak ecosystems in the community. And it was a great experience working alongside Brian Reader, once he came on board as GOERT Chair, and with the other GOERT staff, including Chris Junck and Carolyn Masson who are still working for GOERT. And of course, the many other people involved with the recovery effort, too numerous to mention.”
“I also appreciate the support we received from the Nature Conservancy of Canada (BC Region) for the first eight years. NCC gave GOERT a home (shared office space) and organizational support, and acted as our financial host.” Upon Marilyn’s departure from GOERT, Jan Garnett, BC Director of NCC wrote, “We will miss her dedication, efficiency, creativity, and good humour very much, but we’re happy that she is staying in the field of conservation and close by.”
Marilyn is able to apply what she learned at GOERT in her current position as the Environmental Conservation Specialist for CRD Parks. And through her role with the CRD she now sits on the Recovery Team once again.
Marilyn has a special fondness for Steller’s jays. As part of her graduate research, she studied jay acorn-caching behaviour, and the role that behaviour plays in the regeneration of Garry oak trees. Several years ago, she was thrilled to purchase a house right on the edge of Garry oak habitat at Highrock (Cairn) Park in Esquimalt, where she catches a glimpse of Steller’s jays in the oak trees once in a while.

Thank you Marilyn, you have made a big difference for the future prospects of all living things in this little corner of the earth. In particular, thanks for all your hard work and dedication to Garry oak ecosystems recovery.