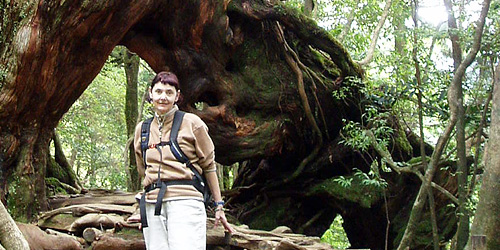 January 2013: Congratulations to long-time GOERT volunteer Michelle Gorman on receipt of her Acorn Award! Michelle has been the co-chair of GOERT’s Invasive Species Sub-committee (ISSC) for many years. She has worked for City of Victoria Parks for 20 years as the Integrated Pest Management (IPM)* Coordinator, and she co-chairs the Municipal Committee of the BC Plant Protection Advisory Council. She enjoys giving plant diagnostic workshops to Master Gardeners and other horticultural groups as time permits. Michelle’s training is in plant protection—particularly in finding environmentally sensitive solutions to plant insect and disease problems.

Marilyn Fuchs, the founding chair of GOERT, first introduced Michelle to the organization and invited her to lend her expertise to the Invasive Species Sub-committee. After Louise Blight stepped down as the first chair of the ISSC, Michelle took on the task of co-chairing with Dave Polster, and they have been sharing the job ever since.

Dave Polster says, “As busy people it has been wonderful to share chairing the ISSC with Michelle. She is available to step in when I am not around and has been instrumental in the good work the ISSC has been able to do. Michelle is very knowledgeable about insect pests and has been happy to share her knowledge with the rest of us. It has been great to work with Michelle on GOERT activities.”

Marilyn Fuchs says, “Michelle brought some unique and valuable expertise to GOERT, with her background in entomology and integrated pest management, as well as her connections with agencies from all levels of government and with the horticultural and pest management industries. I really wonder whether GOERT’s Invasive Species Sub-Committee would have been able to address the taxonomic range that has, if not for Michelle’s expertise combined with her leadership role on the committee. Michelle has also been diligent and steadfast in co-shepherding the committee through so many projects, issues, and requests for consultation on a myriad of topics, and for helping to get GOERT’s interests and issues out to such varied audiences.”

Michelle has her Ph.D. in Entomology, specializing in insects that transmit plant disease. “I’ve always loved insects. My dad was in the military and we moved across Canada quite a bit when I was young. In Ontario there are amazing insects, like praying mantids and walking sticks, and I remember taking my mother outside when I was six and pointing to this stick on the sidewalk and telling her that it was an animal, and she didn’t believe me, so I poked it and it got up and walked away and she screamed, and that was it for me. I was hooked!” 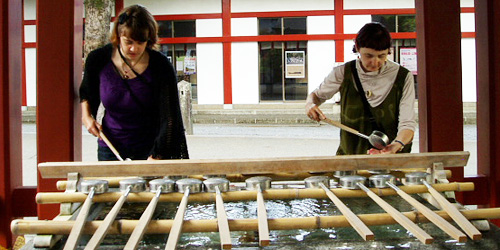 “I chose to do my Master’s in Montana and my Ph.D. in North Dakota because they provided me with scholarships and grants. Besides, Montana’s Entomology Department had eight entomologists and North Dakota’s had 12, all in different areas of study. They were very rich environments that allowed me to understand so much; all these people with their enthusiasm and their expertise were right there. And they’re very down to earth, those bug doctors! We have that in common—we like to teach and share.”

Michelle worked in private industry for nine years for Safer’s Ltd., researching environmentally friendly products. She thoroughly enjoyed her work there, with about 14 scientists all researching different aspects of leading edge work on integrated pest management. She was one of two entomologists looking at biological controls, such as fungi and bacteria, and investigating the possibilities of synergizing existing products. Then came a merger, and unfortunately, research was no longer supported by the company. The researchers scattered, some into the US, some formed a new company, and some moved on to other things.

“I took the opportunity to make a change. I chose the City of Victoria because I could see that I would always have the potential to learn here, because we can grow just about anything in this climate, and we are a port, so there will always be challenges. I was hired to look at plant issues and solve them in an environmentally friendly way. It’s the City of Gardens after all, and there is a never-ending supply of plants with issues to solve. My forte is in looking at things from different perspectives and solving problems, seeing how things are connected. Why did the problem occur, get out of hand, how best to bring things back to normal? With new alien invasive species, we aim for eradication. But most things we work with are already established, so we’re working on management. Even with native insects, it’s important to understand their population cycles and know whether the cycle is normal or abnormal, and whether or not something needs to be done.”

For example, Michelle started her work with the City in September of 1992 and in the spring of 1994 there was an outbreak of Western Tent Caterpillars. The City’s tree crew spent much of its time that spring and summer answering calls about the caterpillars. Michelle set out to do something about it. Through research and working with forestry and provincial labs, they came to understand the insect’s natural cycle, and what causes the population to increase, decrease, or crash. They found that on mature trees, the caterpillars don’t do enough damage to warrant management, but on young trees they can. They now have a policy in place where they look after young street trees (up to five years) that could be defoliated. The mature trees are left to fend for themselves. “Before we used to run around with bucket trucks and up on ladders, hacking tents out of sizeable trees. We don’t expend energy on that anymore.”

In her work, Michelle deals with gardens, sports fields, and natural areas. It’s through her work with natural areas that her work is aligned with GOERT. “Here was an opportunity to work with a group working on invasive species in natural areas. What better way than that to mix with people who are problem-solving and getting best management practices together?”

Michelle was born in Victoria. “My parents built the house at 400 Niagara Street, and I now live around the corner with my cat. I’m on my way to China to visit my daughter Kelly, who is 24; she is in China studying Asia-Pacific studies on a scholarship from the Chinese government. In the summertime, Kelly drives the horse carriages in James Bay and gives great tours down my street. Who knew that the riding lessons she got as a child would land her a paid gig?”

In her free time, Michelle enjoys painting with watercolours, crafting with First Nations friends—doing beadwork and cedar and pine needle weaving. “I really enjoy the people and they are so talented. I’m looking forward to spending more time with them when I retire.”

Michelle brings a wealth of experience and enthusiasm for Garry Oak ecosystem conservation to our team. She has contributed to GOERT in innumerable ways over the years and has contributed to, reviewed and edited countless published materials, and is one of the most long-standing members of GOERT. Congratulations, Michelle, and thanks for all you’ve done for Garry Oak ecosystems recovery!

*Integrated Pest Management (IPM) is an approach that uses a combination of pest management techniques in an organized program to suppress pest populations in effective, economical and environmentally sound ways.