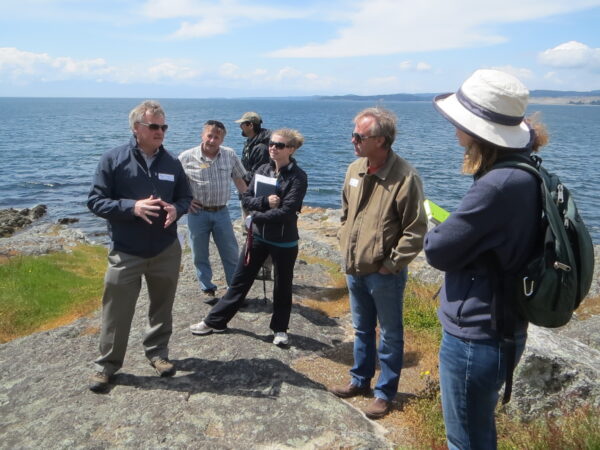 Participants discuss park management during multi-use parks tour. Trampling of rare species can be a challenge in unfenced areas like this one (photo: A. Nasadyk, GOERTS)

Municipal and regional parks on Southern Vancouver Island are a refuge for some of the most intact Garry Oak ecosystems (GOEs) in British Columbia and the more than 100 rare species associated with them; they provide unique opportunities to restore and preserve GOEs. However, even in these protected areas, rare species face many threats, such as trampling, mowing, park infrastructure (buildings, benches, trails, etc.) and invasive species. In one of our current projects, the GOERT Society is bringing together municipal and regional parks planners, managers, and technicians, community members, and GOERT staff to pool their collective experience and knowledge to find ways of dealing with challenges to managing rare species in parks.

“Park staff and visitors don’t intend to harm these vulnerable species and habitats. Providing a bit of information can lead to much greater protection!”

Another goal of the project is to broaden awareness among park users about the presence and significance of rare species, their habitats, and the threats they face. This is being accomplished through guided walks, development of signs, and articles. So far, GOERTS’ Chris Junck has partnered with park staff and ‘Friends of’ volunteers for public walks in Beacon Hill Park (Victoria), Mill Hill Capital Regional District Park (Langford), and Uplands Park (Oak Bay). He also engaged with more than 350 students at an Earth Day event held at Highrock Park in Esquimalt. GOERTS will also provide input into interpretive signs and has various sign templates available for use in parks, including our line of Stay on Track signs to discourage users from venturing off-trail into sensitive areas. Stay tuned for new interpretive signs at protected areas near you! 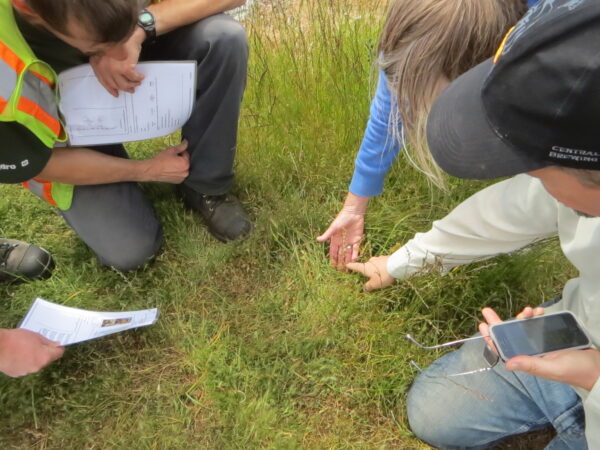 On May 29th 2014, GOERT teamed up with local parks managers, technicians, grounds maintenance workers, and planners from the municipalities of Esquimalt, Saanich, Oak Bay, and Langford on a multi-use park tour. The participants joined Chris and other facilitators at Macaulay Point, Saxe Point, Cattle Point, and Uplands parks. These parks double as areas for both conserving GOE remnants and multiple species at risk while also being popular recreation sites for a variety of uses such as dog-walking, photography, nature appreciation, and jogging. 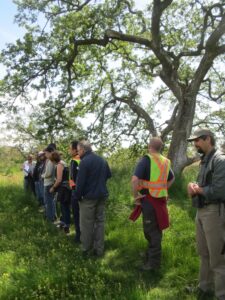 “The sharing of best management practices amongst a variety of staff, volunteers, and other practitioners is a wonderful thing. I look forward to future workshops on the conservation of natural areas.”

– Participant in the multi-use park tour

Tour participants explored rocky coastal bluffs, vernal pool sites, and shallow soil GOEs at each of the parks, as well as the expansive deep soil Garry Oak meadows at Uplands Park. They had a chance to appreciate some of our most at-risk and unknown rare plants, found in only a few places in Canada, and to see the results of volunteers’ and park managers’ efforts to control invasive species: fields of camas and other native plants in full bloom, free of encroaching invasive shrubs such as Scotch Broom. 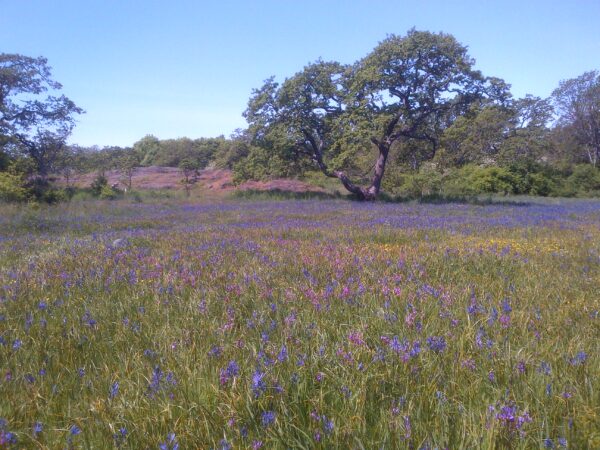 A sea of camas, shooting-stars, and other native plants at Uplands Park (photo: C. Junck, GOERTS)