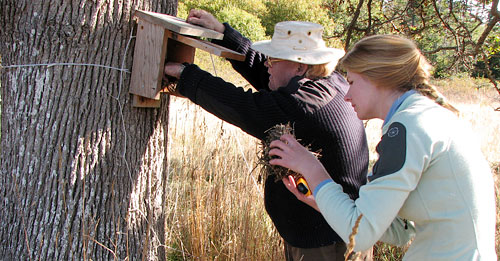 January 2012: It gives us great pleasure to present long-time volunteer Tom Gillespie with an Acorn Award. Tom is one of the founders of GOERT and of the Vertebrates at Risk Recovery Implementation Group (RIG). He is the founding Treasurer of the Garry Oak Meadow Preservation Society (GOMPS), Treasurer for the Rocky Point Bird Observatory Society, and volunteer for the Victoria Natural History Society, Friends of Ecological Reserves, and the BC Purple Martin Stewardship and Recovery Program. 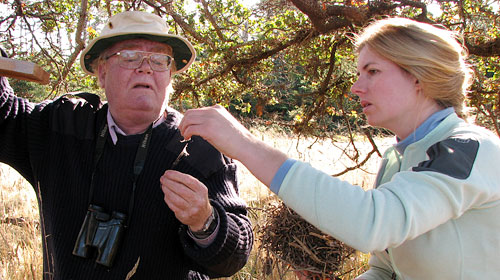 Tom’s love of nature began when he was a child. In 1955 his parents bought Boho Island, next to Lasqueti Island, and built a house there. Nearby Jedediah Island was their playground, and they hiked through the bush to get to the main road on Lasqueti to catch the school bus. When it came time to find work, he got into commercial fishing and construction. In summer he would get out in the seine boats, and in winter he’d find work as a carpenter or in sawmills. He was also a boom man for logging companies for several years. Tom’s father died in 1963, so they sold the island, but Tom continued to live nearby on Vancouver Island, returning often to Lasqueti.
Trudy Chatwin, Chair of GOERT’s Vertebrates at Risk RIG says, “Tom has been a very faithful participant and volunteer on the RIG and has been involved in Garry Oak conservation from the beginning. I know that Tom has supported many conservation organizations, and he has monitored and searched for Coastal Vesper Sparrows and built and monitored many a Western Bluebird box.” 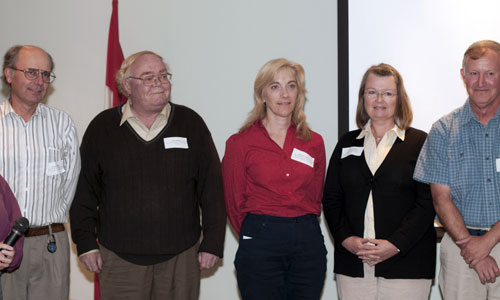 Tom Gillespie, along with some of GOERT’s other founders and early recovery team members, from left: Richard Hebda, Tom, Brenda Costanzo, Tracy Fleming and Ted Lea (photo by Neil Boyle)

Garry Oak Meadow Preservation Society
About his role in GOMPS, Tom says, “I’ve been the Treasurer of GOMPS since the beginning, when we first passed the hat around at an informal gathering at Swan Lake. We sat around in a circle, 62 of us. The money gathered that night got us going for the first little while. At that time, Garry Oak ecosystems were well-known among the science community, but they hadn’t been promoted among the public; we wanted to get people involved in their conservation.”
Colleague Mike Meagher says, “My main impression of Tom is of someone who speaks seldom, but always on target and in a soft voice that belies the direct manner and facts behind his statements. As in other organizations, Tom has played a major role in GOMPS by maintaining membership lists, plus doing all the banking; he has been ‘up to his elbows’ from the moment the first collections of Garry Oak acorns were floated and sorted for Rob Hagel to sow at Pacific Forestry Centre.
I recall Tom describing the time when he was the person tasked with collecting money from participants of the Christmas bird count at 7:30 am in Beacon Hill Park. Suddenly, out of the December darkness, came the voice of a staunch defender of the park: ‘Is this a commercial transaction I see?’ Although nothing was being sold, the BC Court had decided that the terms of the Provincial lease to Victoria excluded such “transactions”, so Tom had to move camp to a neutral location to permit volunteers to generate useful data regarding annual variation in biodiversity, only slightly chagrined by the irony of being accused of conducting a ‘commercial enterprise’ when he was a member of the steering committee to draft a management plan for the park!
Our community has benefited for many years from Tom’s quiet and persistent volunteering. His legacy will not appear on any balance sheet, but in the strengthened groups he has supported and the environments he loves.”

Victoria Natural History Society
Of his role in the Victoria Natural History Society, Director Claudia Copley says, “Tom is absolutely indispensable. He has been doing things for us for so long that no one knows just how much. He has handled the mailing of our magazine for decades, which requires a significant effort, and means he is also very involved in maintaining the membership. He has been our president, and has taken on various other board roles. He picks up all our mail and gets it to the right people. He has represented us to our umbrella organization, BC Nature (The Federation of BC Naturalists) for many years, and he has become our informal archivist because of his long relationship with the organization and his long memory. He’s been a field trip leader, a team leader for the Christmas bird count, and he has been there whenever he was needed for anything else. He is a pillar of the Society.”
BC Purple Martin Stewardship and Recovery Program
Bruce Cousens and Charlene Lee write, “Tom has been involved with the conservation and recovery of Purple Martins in BC since the mid -1980s when the first nestboxes were built and installed in the Victoria area. He helped monitor Purple Martin activity at the nestbox sites and has built many boxes for the recovery program. When Cam Finlay started the Purple Martin banding study in 1996, Tom became his banding assistant. He also took on management of the banding database, which has since grown to include over 14,000 banded martins, the only long-term banding study in North America providing valuable information about the western subspecies.
Since 2002, Tom has been the South Island Regional Coordinator for the BC Purple Martin Stewardship and Recovery Program. He has been instrumental in continuing the monitoring of Purple Martin activity at the Victoria area colonies, organizing volunteers, banding nestlings, maintaining nestbox check and banding records, and submitting the annual data to the Canadian Wildlife Service Bird Banding Office.
We at Georgia Basin Ecological Assessment and Restoration Society (GBEARS) are extremely grateful for Tom’s dedication and commitment to Purple Martin conservation and recovery for over 25 years, and for his volunteer support for more than a decade, conducting the south Vancouver Island portion of the BC Purple Martin Stewardship and Recovery Program.”
Cam Finlay writes, “When I began a study of Purple Martins back in 1996, it was Tom who drove the boat and held it still against a piling to allow me to climb ladders to get nestlings, and then he banded them when I handed them down. So began his work on martin research which he has continued to the present. Each year he monitors the arrival of the parents in the spring and then watches the adults to determine when he should come and band the nestlings from the major site at Esquimalt—and later, from other sites, including the Royal Roads colony.
Tom also helped me when I first began studying and banding Anna’s Hummingbirds in 1996. He made the various traps and helped mount the devices. Without Tom’s help, much of the early studies of hummingbirds in Greater Victoria would not have been accomplished.” 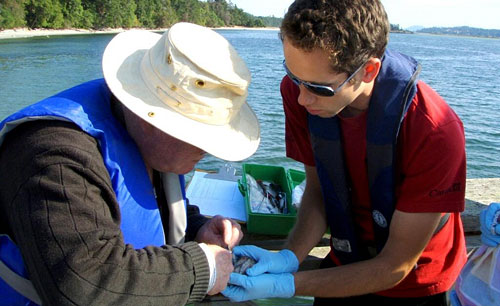 Rocky Point Bird Observatory
Of Tom’s contributions to the Rocky Point Bird Observatory, member Alison Moran says, “Tom is an active board member and has volunteered untold hours and expertise. He has been the Treasurer for years, but he also looks after so much else, getting the trailers organized, the solar panels, and a host of other details that make the season run well. Tom is one of our bird banders for the hummingbird migration monitoring group that monitors sites regularly across BC and into Alberta. For many years, it was Tom that ensured all our data got uploaded to Canadian Wildlife Service, a time-consuming and often frustrating job, but absolutely fundamental to the dissemination of all our volunteers’ work. Tom’s activities and energies have benefited so many organizations and worthwhile endeavours. This award is richly deserved.”
A few years ago, Tom helped the GOERT Society prepare our application for charitable status, which is known to be a nightmare process among charities. Tom helped us get everything in order, and we’re happy to report that our application was approved the first time around without a hitch. Thanks again Tom, for your many years and countless contributions to the recovery of Garry Oak ecosystems!
Tom adds his Acorn Award to these previous awards: