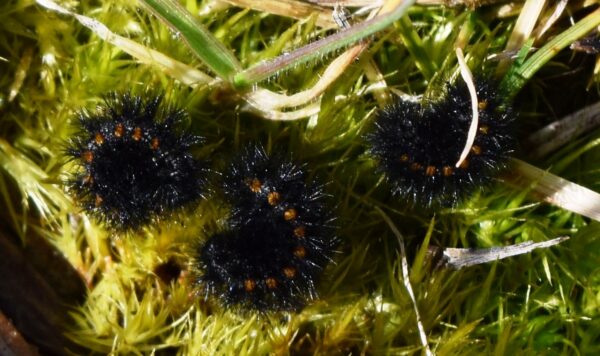 Life for endangered Taylor’s checkerspot butterfly caterpillars is a risky endeavour. If the caterpillars manage to find safe places in the fall to overwinter in their dormant (diapause) larvae form, they emerge in February or early March and need to quickly find enough nutritious plants to eat. In Helliwell Provincial Park, they’ll search for speedwell, plantain, harsh paintbrush, blue-eyed Mary, or a few other suitable species. Hopefully, they won’t encounter severe weather, predators or parasites before they emerge as adult butterflies in late April to mid-May.

The odds aren’t in their favour, so this critically at-risk species needs help from humans to survive. Nearly 800 Taylor’s checkerspot caterpillars reared under the care of Wildlife Preservation Canada staff, in collaboration with the Vancouver Zoo, were released in Helliwell Provincial Park last March. In follow-up surveys there were 74 confirmed sightings of Taylor’s checkerspot butterflies over 20 days, but some of those individuals may have been tallied more than once. There may have been more adults in the area than those that were counted, but the number of caterpillars that became adult butterflies was likely low. 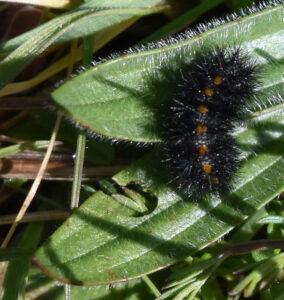 Taylor’s checkerspot caterpillars are tiny and difficult to see. Please walk carefully in the park and stay on marked trails! Photo by Chris Junck.

Although there are several natural causes of butterfly mortality, there are things that people can do to help increase their chances for survival, such as planting pollinator friendly gardens and watching where they step. According to BC Parks conservation specialist Erica McClaren, “Trampling is one of the greatest threats to the caterpillars and their food plants.” Park visitors and their pets can help reduce this risk by staying on the marked meadow trails delineated by ropes and restoration area signs. Erica also emphasizes that park regulations stipulate that dogs must be on a leash and bikes aren’t allowed in Helliwell. She also encourages the public to report Taylor’s checkerspot sightings to butterfly sightings to Taylors.Checkerspot@gov.bc.ca, or by using the free iNaturalist app. It’s an easy to use species identification tool that enables citizen scientists to record and contribute important species data for projects around the globe.

If all goes well, the Taylor’s Checkerspot Butterfly Recovery Project Team will release more caterpillars into Helliwell Provincial Park this March. The recovery initiative also includes extensive habitat restoration in the park, such as selective tree and invasive plant removal, and adding native plants and seeds. Although focused on Taylor’s checkerspot, several other rare coastal bluff ecosystem species will benefit from this project including dun skipper butterflies and about a dozen other range-restricted butterflies, western bumble bee, many native plants, bats, western screech-owl and numerous other birds.

The recovery project has benefited from funding generated by the BC Parks License Plate Program, the Environment Canada Habitat Stewardship Fund and the Habitat Conservation Trust Foundation.