Are butterflies rebounding in Helliwell? 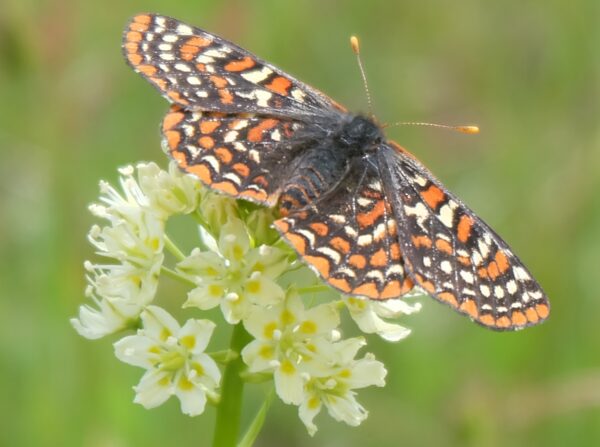 BC Parks and the Taylor’s Checkerspot Butterfly Recovery Project Team conducted butterfly surveys in Helliwell Provincial Park on Hornby Island for the third consecutive year. It’s an important step in the multi-year project that aims to re-establish a population of the critically endangered Taylor’s Checkerspot butterflies in the park.

“We are trying to determine approximately how many of the 5,400 captive reared larvae that we released in March survived to become adults,” said Jennifer Heron, chair of the project team and provincial invertebrate conservation specialist with the B.C. Ministry of Land, Water and Resource Stewardship.

The caterpillars were reared at the Greater Vancouver Zoo with the support of Wildlife Preservation Canada staff.

Local community volunteers and two conservation technicians conducted the surveys. They were initially concerned that they saw few butterflies and wondered if the long, wet spring caused high caterpillar mortality or perhaps the weather delayed butterfly stage development and emergence. Eventually, more than 300 Taylor’s Checkerspot butterflies were observed. Other at-risk butterflies were also seen, such as Propertius Duskywing and Western Pine Elfin.

The number of Taylor’s Checkerspot butterflies that were counted was comparable to survey results from other areas where more than 5,000 larvae have been released.

“We know from other projects that releasing at least 5,000 larvae per year for five years seems to be what is needed to establish a population, because that will usually result in about 250 adult butterflies each year,” said Heron. 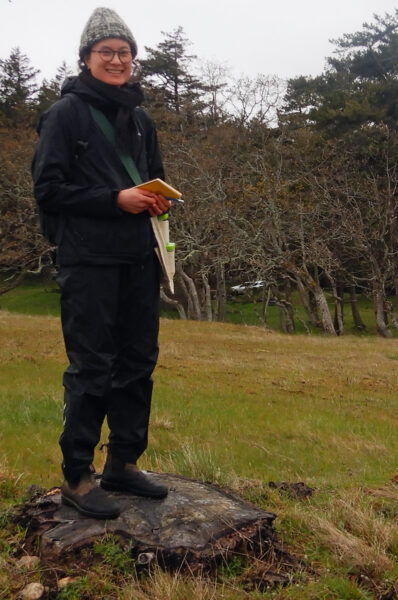 The two conservation technicians, Kihan Yoon-Henderson and Pascale Archibald, were in the park for 39 days during the butterflies’ flight period and logged approximately 172 survey hours. Despite the uncooperative weather in early May, Pascale said: “I thoroughly enjoyed my time working on this project. I conducted Checkerspot butterfly surveys on Hornby Island last year and was very pleased to continue for another round of surveys in Helliwell Provincial Park.” 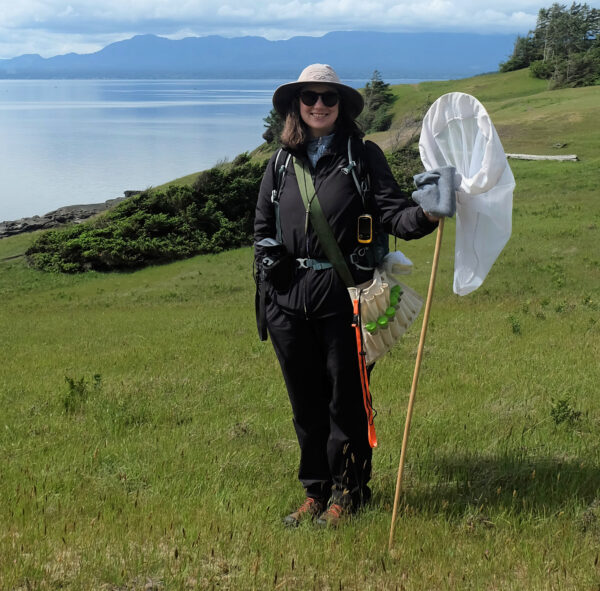 Similar surveys were conducted on Denman Island and in the Campbell River area to provide a better sense of how Taylor’s Checkerspot butterfly populations in Canada are faring.

This recovery initiative has required extensive habitat restoration over several years in Helliwell Provincial Park, such as selective tree and invasive plant removal, and the addition of native plants and seeds. Although the project is focused on Taylor’s Checkerspot butterflies, several other at-risk and uncommon coastal bluff species benefit from this work, such as Dun Skipper butterflies, about a dozen other range-restricted butterflies, Western Bumble Bees, bats, Western Screech Owls, and numerous other birds and plants.