Bringing Butterflies Back From the Brink 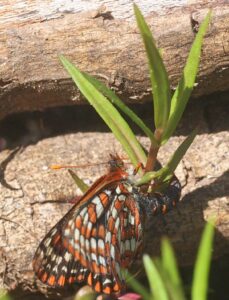 The last known population of Taylor’s Checkerspot Butterflies in Canada just got a big boost with a lot of help from their friends. Nearly 60 adults and more than 280 larvae from the Taylor’s Checkerspot Conservation Breeding Facility (TCCBF) were recently released in the BC Parks Butterfly Reserve on the north end of Denman Island. And as a bonus, at least three newly released females laid eggs. This is a much-needed augmentation of the wild Checkerspot population on Denman that has declined rapidly from several thousand to fewer than 100 counted during surveys in recent years.

The butterflies were carefully tended at the TCCBF by manager Peter Karsten, his summer assistant Savannah Salas, and numerous community volunteers. Adults were weighed, marked (so that individuals can be identified and monitored), hand-fed, and bred. More than 1,000 eggs were collected for the breeding program next year. Then Andrew Fyson and John Mills selected sites in the Butterfly Reserve with appropriate food plants, and gently released the butterflies over several days. Andrew reported that they “were excited to observe 3 bred, newly released females laying eggs” – something very few people have witnessed. 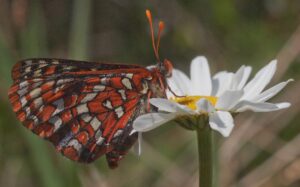 The blue spot on this female’s wing was added to help monitors to identify her. Photo: A. Fyson 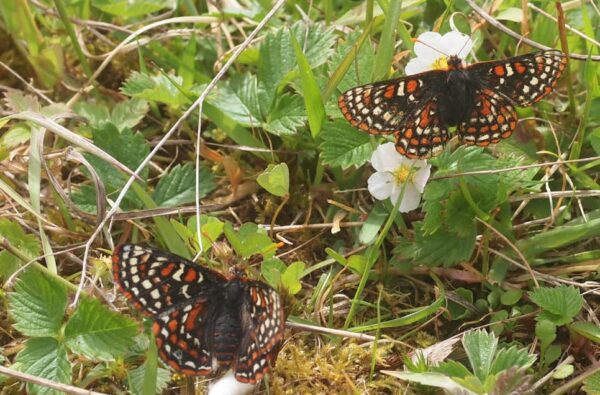