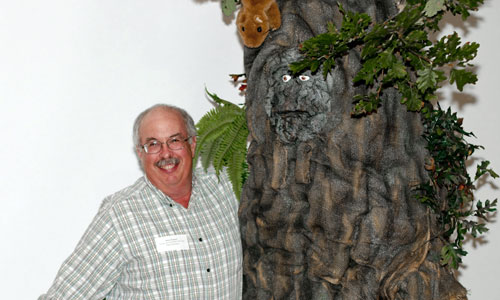 Acorn Award October 2009: It’s high time we presented an Acorn Award to GOERT member Dave Polster. Dave volunteers on the Restoration and Management RIG as well on as both of its committees: he is a member of the Native Plant Propagation Steering Committee and co-chairs the Invasive Species Steering Committee. He also volunteers on our board of directors. Dave has an amazing ability to be in several places at once, working to restore Garry oak habitat while simultaneously directing mine reclamation in far-flung places and dropping by to give advice on small-scale restoration projects.

“You never know where you’re going to run into Dave. One day I stopped in at Rathtrevor Park and there was Dave with his tiger torch”, says GOERT staff member Chris Junck. “He’s like a terrier the way he latches onto something and sticks with it.” Besides being hot on the trail of new invasive plants, Dave is a lead author for our upcoming restoration compendium, coordinates the restoration and research at Somenos Garry Oak Protected Area and has been involved in restoration projects at many other locations, including Mt. Tzuhalem Ecological Reserve as a consultant and pro bono.
Beanies and Bread
Dave is very adept with a tiger torch (a propane torch that he uses for spot torching invasive species), and he is an inventor. He invented a GPS beanie, which is a GPS unit (Global Positioning System) attached by wire and clip to a tin can lid that is then duct-taped to a ball cap. The tin apparently helps the wearer and the GPS commune better with the celestial satellites overhead while doing surveys in the field. It’s a very becoming field fashion statement. 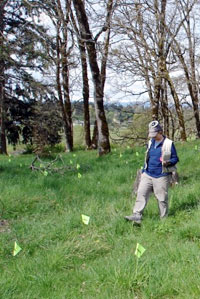 Biologist Tracy Fleming has worn the beanie and has worked with Dave often. “The great thing about Dave and the vast amount of work (paid and volunteer) that he does is that he is a man in his prime and will be around for a long time to come to do scads more of the same! When I think of Dave I think of how he chortles during and after relating a story. And I am convinced that his GPS beanie has ‘augmented reality’ qualities that help him multi-task and be in several places at once. The beanie must also have a sensor on it that alerts him to eco-offenses because he is a first responder to new invasive plants in our area, oak tree cutting and gatherings of other eco-defenders.”
Chris Adams of Adams Environmental Solutions adds: “Dave’s experience and knowledge is vast, and his sharing of the two with me has been instrumental in the growth of me personally and of my company. He is a valued mentor and I thank and respect him greatly.”
Dave is known for promoting social activities within GOERT. Chris Junck adds: “He once emailed to say that he was baking bread and wondered who it was that had asked for some. He was offering to bring it to the next meeting.” 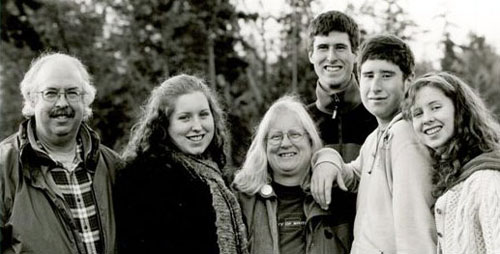 Dave and Genevieve with their four children

Home-based business
Dave and his wife Genevieve Singleton, a natural history interpreter, run a home-based consulting business, Polster Environmental Services. While Genevieve manages the business, Dave keeps busy with environmental surveys, reclamation, road deactivation, ecological restoration and soil bioengineering for park developments, hydroelectric developments and mines, the transportation sector, forest sites, gravel pits and industrial developments. He contributed to the Best Management Practices for Urban and Rural Land Development (2006 edition) and is a pioneer in soil bioengineering solutions for the treatment of steep and unstable slopes in western Canada. Dave has his Master’s degree in Ecology and is a Registered Professional Biologist. He teaches and advises at UVic’s Restoration of Natural Systems program and teaches at Vancouver Island University’s Natural Resources Extension Program.
In 1974 Dave and Genevieve met at the University of Victoria in a plant ecology class taught by Marc Bell where Dave was the lab assistant. They now refer to Marc as the honorary godfather of their children. Dave is a committed family man, devoted son, and father to four children ages 18-26. He is very active in his faith community as a Quaker and is a long time peace activist. In his rare free moments he enjoys opera and symphony with his mother, birding and botanizing with Genevieve, photography and astronomy. He can occasionally be spied at local hockey games.
Says Genevieve, “What would be our recreation room is Dave’s office and it’s full of his plant presses, photos, writing, and papers. Has has written the equivalent of many novels with all the reports he does. “Dave has a bit of the mad scientist in him. His passion for the outdoors and saving ecosystems knows no boundaries. He is one of those rare people who has found what he loves to do and just does it. He works very hard in many areas to make a positive difference in the world.” 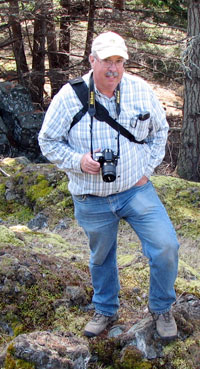 Dave Polster out standing in his field (photo by Carolyn Masson)

Dave has an interesting family background. He was born in Philadelphia and his family moved to Argenta, BC in 1967 because of the politics during the Vietnam War. He became a Canadian citizen many years ago. He has been a Quaker most of his life, and Genevieve became a Quaker after she met him. His mother was very active in the peace movement and worked with Martin Luther King. Dave remembers his father carrying him on his shoulders at a peace rally around the White House.
In his spare time
In addition to serving on the GOERT board and working groups, Dave is also on the board of the Association of Professional Biologists of BC, the BC Chapter of the Society for Ecological Restoration and the Invasive Plant Council of BC, the Association of Professional Biologists of BC, and is the past-president of the Canadian Land Reclamation Association. He was recently appointed to the advisory committee for the restoration of the storm damage in Stanley Park.
Dave can add his Acorn Award to his Noranda Land Reclamation Award from the Canadian Land Reclamation Association in recognition of excellence in and contribution to the profession of land reclamation (2007), and his CRD Ecostar Research and Technology Award (2004).
GOERT Chair Brian Reader says: “Dave is indeed a friend of the environment and its most imperilled species, devoting himself at work and leisure to environmental restoration and education. Dave is always there to lend a hand and has been a steadfast and long-serving member of GOERT and its many committees. We should really have bought Dave a new car for his award as he wore out old ‘trusty rusty’, his valiant Toyota station wagon, dashing around to meetings and restoration sites. However he beat us to it and today you can see Dave sporting around in his appropriately economical and eminently practical new Toyota; perhaps tricked out with his Acorn Award on the dashboard. Keep on cruisin’ Dave!”
Congratulations Dave, and thank you for your many generous contributions to Garry oak ecosystems recovery! 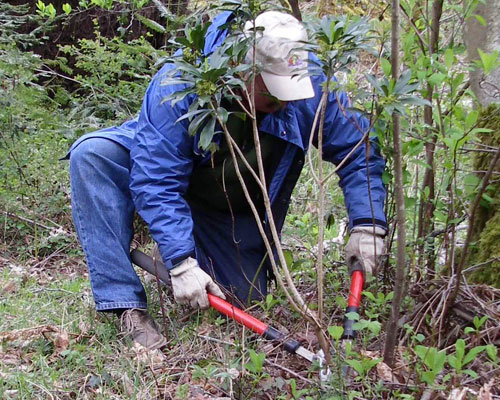