Some wetland areas of the butterfly reserve in Denman Island Park and Protected Area aren’t staying wet. They may be replenished during the rainy season, only to dry up before summer. Others filled in with plants, including non-native Scotch broom, thistles, and reeds, and are no longer wetlands. This is a problem for endangered Taylor’s checkerspot butterflies because some of their host plants need these habitats to remain wet to sustain the plants through the entire growing season. 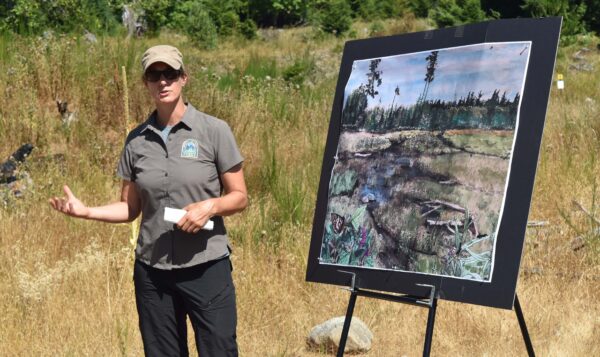 BC Parks hired specialists between 2018 – 2021 to study the wetland ecology and waterflows in and around the butterfly reserve before developing a wetland restoration plan for the site. Denman Island residents were invited to provide input on the restoration plan during a meeting at the Butterfly Reserve on August 10th. Representatives from the Denman Conservancy Association, Denman Island Parks Committee, the Taylor’s Checkerspot Butterfly Recovery Project Team, adjacent landowners, BC Parks and wetland restoration consultants attended the meeting. “The on-site discussions were super helpful to refine the plan and incorporate local knowledge of the site,” said BC Parks conservation specialist Erica McClaren. 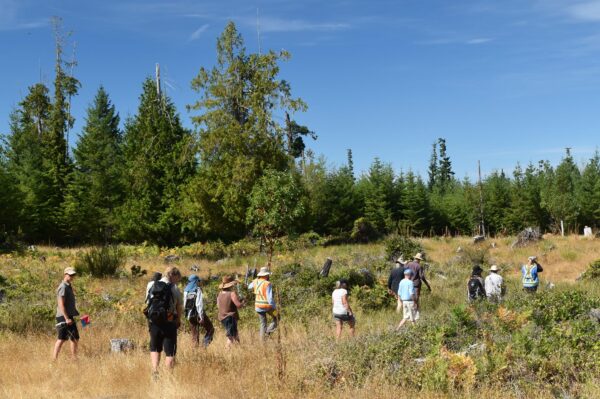 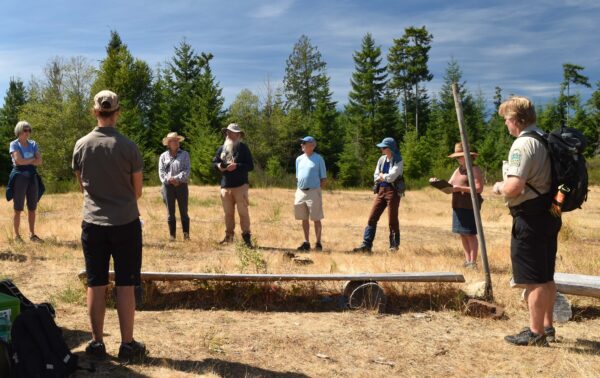 Denman Island residents provided local knowledge of the site and useful comments for refining the plan. Photo by Chris Junck.

In early October, the first phase of the plan was implemented in the southwest corner of the butterfly reserve. Wetlands of various sizes, depths, and the length of time they hold water were created to provide habitat for speedwells – an important food and nectar plant for Taylor’s checkerspot butterflies. During the summer, invasive plants were removed and in early November a range of native plants that will benefit Taylor’s checkerspot larvae and adult butterflies will be planted and seeded around newly created wetland sites.

Krissy Brown from the K’ómoks First Nation was the cultural monitor during construction of the wetlands.  The BC Wildlife Federation held a Wetland Institute on October 3rd for participants to observe and learn about wetland restoration in action. 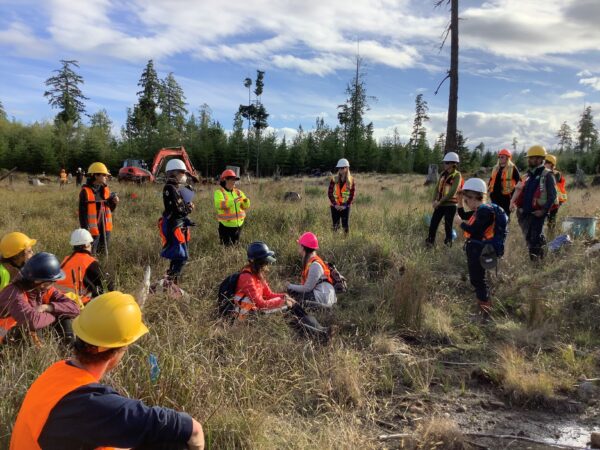 The BC Wildlife Federation Wetland Institute participants in the butterfly reserve on October 3rd during the wetland restoration. Photo by Katy Fulton.

“We hope that this work will help maintain the wetlands and we’ll see more Taylor’s checkerspots and other butterflies in the reserve in the future,” said BC Parks area supervisor Derek Moore. The site will be monitored for host plant growth and Taylor’s checkerspot presence in the coming years, and if the project is successful, similar restoration techniques will likely be implemented at other sites in the Butterfly Reserve.