The Joy of Spotting Checkerspots and Other Butterflies 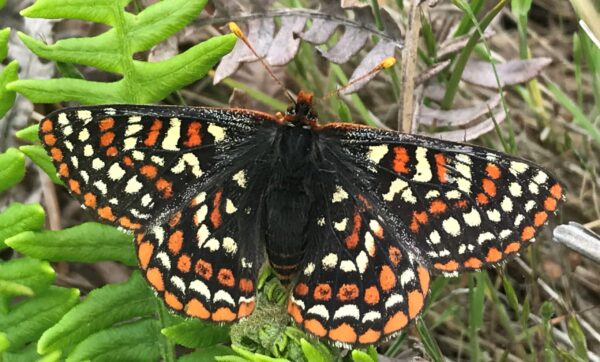 One of the first Taylor’s Checkerspot butterflies observed in Helliwell Provincial Park since the 1990s! Photo by J. Heron.

Almost every day, from late April to early June, dedicated Hornby Island Natural History Centre volunteers walked the coastal bluff trails in Helliwell Provincial Park. They counted butterflies with members of the Taylor’s Checkerspot Butterfly Recovery Project Team, BC Parks conservation specialist Erica McClaren or other biologists to determine how the critically endangered Taylor’s checkerspot butterfly populations in the region are faring. Similar surveys were conducted elsewhere on Hornby Island, Denman Island, and from the Comox Valley to Campbell River.

“More than a dozen types of butterflies were seen in Helliwell, including two other at-risk species – propertius duskywing and western pine elfin,” said biologist Pascale Archibald. She also noted which flowers Taylor’s checkerspot butterflies visited for nectar. On the menu were native species, such as woolly sunflower, common camas, death camas and buttercups. Dandelions, English daisies, ribwort plantain and other weeds were also favoured.

The butterflies were often seen basking in the sunshine while perched on plants or the ground. A few mating Taylor’s checkerspot pairs were also observed. This could result in a significant boost to the butterfly population as each female can produce hundreds of eggs, some of which could develop into overwintering diapause larvae if they find enough nutritious food and don’t get stepped on. 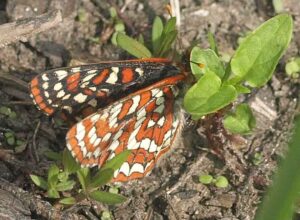 “Trampling is a key threat to survival for butterflies and their food plants,” said Erica McClaren. She reminds visitors that dogs must be on a leash according to provincial park regulations and bikes are not allowed in the park. McClaren also urges people to report sightings to Taylors.Checkerspot@gov.bc.ca, or by using the free iNaturalist app (www.inaturalist.org). It’s an easy-to-use species identification tool that enables citizen scientists to record and contribute important species data for projects around the globe.

The Helliwell Provincial Park surveyors were pleased to see Taylor’s checkerspot butterflies almost daily for three weeks of survey time starting on April 30, and on May 4, McClaren spotted the highest number of checkerspots (30) on a single day. These are encouraging signs that the habitat restoration work in the park and the releases of caterpillars reared at the Greater Vancouver Zoo by Wildlife Preservation Canada staff (about 800 in 2020 and nearly 1,300 this spring) may help re-establish a Taylor’s checkerspot population on Hornby Island. The species disappeared from the island in the 1990s.

“We’re very grateful for the assistance we receive from Hornby Island volunteers and other project supporters,” said Jennifer Heron, Chair of the Taylor’s Checkerspot Butterfly Recovery Project Team and invertebrate conservation specialist for the B.C. Ministry of Environment and Climate Change Strategy. She added, “There has been a lot of local assistance for the project from Helliwell Park neighbours in High Salal Ranch Strata, volunteers, Conservancy Hornby Island, the Hornby Island Natural History Centre, and Hornby Island Provincial Parks Committee.” The recovery project has also benefited from funding and in-kind contributions from the Habitat Conservation Trust Foundation, the BC Parks License Plate Program, the Environment Canada Habitat Stewardship Fund and others.