Anticipation of Spring on Eagle Island
by Fran Spencer, Parks Canada Agency
As I sit here listening to the wind and rain rattling my window I dream of bright spring days on Eagle Island. I can almost feel the sun warming my shoulders and see the bright spring flowers carpeting the ground beneath the oaks. Could there be a better picture of paradise? 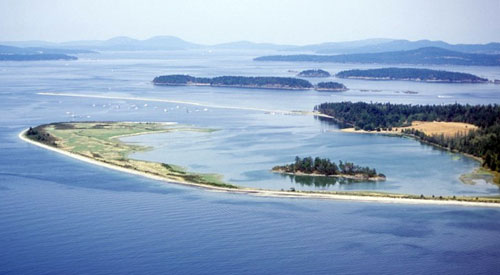 But this is a dream of spring to come, not a reminiscence of springs recently past. To bring this vision back to life, this once lush and idyllic island is in need of help, for its spring meadows and fragile ecosystems are threatened by invasive plant and animal species. Parks Canada has taken up this challenge and in 2007 began restoring the ecological integrity of Eagle Island.
Bringing it back
Eagle is a small island cradled in the Hook Spit of Sidney Island, part of Gulf Islands National Park Reserve. Most of the island is open Douglas-fir forest or rare and endangered Garry oak communities. With so little Garry oak habitat left in Canada, it is essential to protect what remains.
Initial observations found that grazing, browsing and trampling by deer and Canada geese are the primary causes of ecological damage on Eagle Island. To restore Eagle Island’s natural function and ecological balance, two main objectives need to be addressed: eliminate grazing, browsing and trampling by deer and geese; and reduce the presence of non-native, invasive plants. 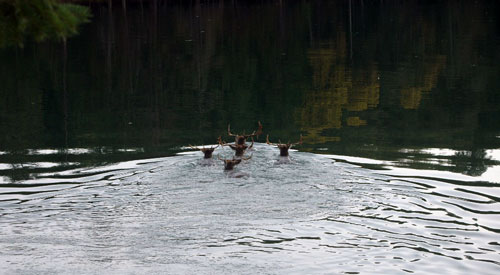 Fallow Deer
Non-native fallow deer (Dama dama) were first imported to Sidney Island in 1902 and have now reached a population exceeding 1500 individuals. Large herds of fallow deer have completely stripped the lower branches of trees and shrubs. The deer access Eagle Island by swimming across the lagoon or walking over at low tide. Here they have grazed all accessible vegetation to the ground, essentially suspending all plant regeneration, and Eagle Island’s spring meadows, instead of showing a diversity of colour, are white with toxic death camas, the only plants the deer do not eat. 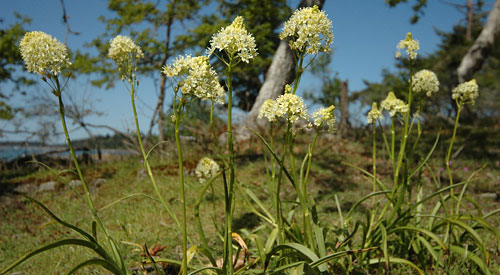 Deer proofing
To restore the ecological balance on Eagle Island it is clear that geese and deer need to be barred access from the island. Installation of a low visibility, deer exclusion fence around the perimeter of the island began in the summer of 2008. That fall, once the fence was completed, the fallow deer continued to challenge the exclosure.
Eagle Island may be part of the male mating territories (leks) for the fallow deer of Sidney Island. This could explain the bucks’ persistent testing of the fence. During this protracted battle of wills and wits the fence was continually modified in an attempt to make it truly deer proof. To thwart the deer in their attempts to gain entry under the fence, a combination of bottom tension cables, metal rodent barrier, rocks and split rail fencing were added to reinforce and weigh down its bottom edge. At the present time the fence appears to be holding and continued success will be monitored through deer pellet counts and the presence/absence of deer and geese through visual observation. If necessary the fence will continue to be modified.
There is a problem with geese too: in April 2008, 15 Canada goose nests with an average clutch size of five were recorded on the island. Without restoration measures, the problem of invasive species compounds with each spring. 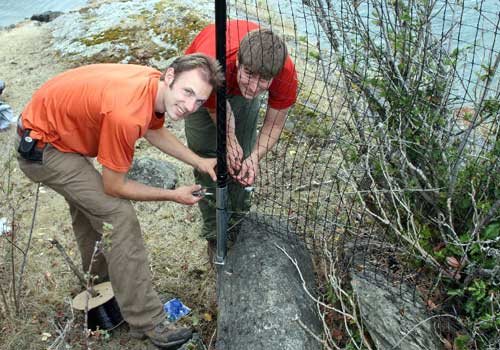 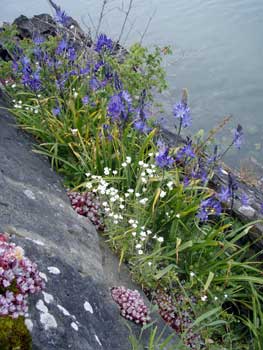 A peek into the future: a pocket of spring flowers inaccessible to the deer and geese on Eagle Island (photo © Parks Canada/George Mercer/2008)

Dare to dream
Will ecological balance return to Eagle Island as these issues are addressed? Dare we dream of verdant spring meadows filled with native species? The profusion of spring flowers found in pockets of habitat inaccessible to the deer and geese, and in vegetation surveys conducted in 2008, provide a hint of the plant diversity that may appear after a season without the relentless grazing of deer and geese and competition from invasive plants. Imagine early spring drifts of fawn lily, followed by the deep blue of camas and the sunny yellow of native buttercups. Will these species make it to flower now that the deer have been excluded? I dream of looking up into a brilliantly blue sky with just a wisp of pure white cloud, and a butterfly dancing by, perhaps a rare species returning now that the native plants are back in profusion.
As I lean back I hear the mating call of song birds decked out in their mating plumage. Though Eagle Island is small, it lies along the Pacific flyway and its meadows, forest, coastal bluffs and near-shore habitats should provide a wide variety of foraging and cover opportunities. It follows that a diverse variety of bird species could potentially be found on the island. Has a lack of vegetation lowered their numbers? Will we see a large change in diversity of wildlife this year?
Spring is a time of reawakening and new discoveries. Now that restoration has begun, will spring on Eagle Island be all that we dreamed of? How dramatic and immediate will the results of our restoration endeavors be? We wait with great expectation.