The forest and non-native plants are taking over Helliwell’s rare coastal bluff meadows. Photo: BC Parks

The coastal bluff ecosystems of Helliwell Provincial Park are unique in Canada. These open meadows are part of the Garry Oak and associated ecosystems – habitats that were once widespread in the eastern lowland areas from Comox south to greater Victoria and throughout the Gulf Islands. Coastal bluff meadows are home to many rare plants, insects and birds that are at the northern limits of their global distribution and occur nowhere else in Canada. Current threats to these ecosystems include: human development; agriculture; suppression of fire; invasive non-native species; and elevated black-tail deer populations.

The species within these ecosystems depend on sunny, open habitats with typically shallow soils over bedrock. Some seasonal pools or wetlands exist within bedrock depressions and seepage areas. Prior to European settlement, wildfires naturally kept these habitats open and released nutrients to the meadow plants. First Nations also used these meadow habitats for the harvest of important plants such as camas and they traditionally burned these areas to increase and maintain plant abundance. Fire suppression began about 150 years ago, with European settlement and widespread land-clearing for agriculture. It was also at this time that non-native plants such as Scotch Broom, English Holly, Himalayan Blackberry, and agricultural grasses began to spread and become established.

The upland portion of Helliwell Provincial Park was established in 1966 to protect many values, including the open coastal bluff and Garry Oak ecosystems. The foreshore area of Helliwell was added to the park in 1992 and Flora Islet in 1996. It is clear from looking at past air photos spanning 1931 until today that Douglas-fir and Shore Pine are gradually filling in the once open coastal bluff and Garry Oak meadows of the park.

Garry Oak and Arbutus trees on right are showing signs of stress from competition. Photo: BC Parks

Garry Oak and Arbutus trees are showing signs of stress from competition for light and nutrients. If no management action is taken, the shallow soils over bedrock on the bluffs will become deeper and will support more Douglas-fir trees. Gradually, the primarily open bluff viewscapes and unique meadow ecosystems of Helliwell Park will become a closed canopy windswept Douglas-fir forest with limited viewscapes. This ecosystem change is not the natural path of succession as it does not include fire as a natural disturbance regime.

In 2001 an Ecosystem Based Plan was written for Helliwell Provincial Park. This plan divided the park into nine vegetation management zones. The zones with coastal bluff and Garry Oak meadow ecosystems were ranked as being marginal to poor for naturalness and viability provided no future management actions are taken to undertake ecological restoration in these zones. Fire suppression and encroachment of trees and shrubs were stated as having led to the most complex management concern in Helliwell Park. Furthermore, the 2003 Purpose Statement for Helliwell Park identified the Primary Role of Helliwell Provincial Park is to protect the rare and endangered terrestrial ecosystem elements and representative examples of marine ecosystems. A known management issue identified within this Purpose Statement is the encroachment of trees into the meadows.

Before Phase I coastal bluff restoration work. Photo: BC Parks

After Phase I coastal bluff restoration work. Photo: BC Parks

Using the 2001 Ecosystem Based Plan and the 2003 Purpose Statement to guide management priorities for Helliwell Provincial Park, BC Parks (Ministry of Environment) and the Garry Oak and Associated Ecosystems Recovery Team (GOERT) applied for restoration funds through the federal Habitat Stewardship Program in 2014. We began slow and careful steps to implementing some priority management actions; starting West of the main bluff trail in an area that hosted the last population of Taylor’s Checkerspot butterflies on Hornby Island until the early 2000s. This area is described as Zone 1 in the Ecosystem Based Plan. During the first Phase of this restoration project a very dense, windswept swath of young (under 45 years old) Douglas-fir trees were removed. In the Spring and Fall of 2015 the area was seeded and planted with native plants that grow in coastal bluff and Garry Oak ecosystems. Ongoing weeding and planting will occur in these areas until a sufficient cover of native species has been established. We are hopeful that restoration efforts will help this area be ready to support the release of Taylor’s Checkerspot butterflies that are being bred from the last remaining Denman Island population. 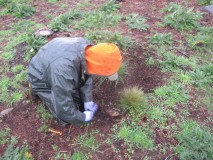 Repeated planting and weeding are required to restore the meadows. Photo: Kristen Miskelly

In the Spring and Fall of 2015 the area was seeded and planted with native plants that grow in coastal bluff and Garry Oak ecosystems. Ongoing weeding and planting will occur in these areas until a sufficient cover of native species has been established. We are hopeful that restoration efforts will help this area be ready to support the release of Taylor’s Checkerspot butterflies that are being bred from the last remaining Denman Island population.

Most recently, additional tree removal and limbing of younger (less than 45 year old) Douglas-fir and Shore Pines, within the area West of the main trail occurred. Several smaller trees were starting to take hold in the open meadows and scattered larger trees were starting to change meadow habitat to deeper soils; which will lead to understorey plant community changes and possibly, colonization by invasive weeds. Unfortunately, due to contracting and timing restrictions we were unable to remove the cut trees and limbs immediately. We heard from Hornby Islanders that the stacked piles were an eyesore and these piles have now been chipped and removed from the Park. Our apologies for the short-term delay in this part of the project.

We will be carefully monitoring the results of these restoration efforts and will use these results to guide future restoration plans. We are hopeful that ongoing weeding of non-native plants; planting and seeding of native coastal bluff and Garry Oak ecosystem plants and increased light and less competition for water will slowly start to bring important species back into these unique ecosystems within Helliwell Park.

The Helliwell Restoration Project is a collaborative project that brings together scientists, conservationists and the local community. To date, BC Parks has engaged the public through meetings and discussions with local advisory groups (Hornby Island Provincial Parks Committee, Conservancy Hornby Island, Hornby Island Natural History Society). Our goal is to maintain open lines of communication with Park users through the Hornby Island Facebook page and the local papers, BC Parks website and GOERT website. We conducted a public survey from August 22-September 30, 2015 and we have given a talk at the Literary Lunch series. There are many opportunities to become involved in this project, and we are looking for local involvement.

Although one part of this project is focused on bringing an Endangered butterfly back to Helliwell Park, the broader goal is to contribute to the national recovery of Endangered coastal bluff and Garry Oak ecosystems, the species that inhabit them and the ecological processes that maintain them, for future generations to enjoy.