You may think it wouldn’t be hard to find a bright orange, black and white butterfly. But Taylor’s Checkerspot (Euphydryas editha taylori) butterflies are difficult to spot because they’re small and extremely rare. Finding and monitoring these butterflies and their larvae are just a few of the challenges facing a team of more than 25 dedicated scientists and local residents collaborating to recover the species. 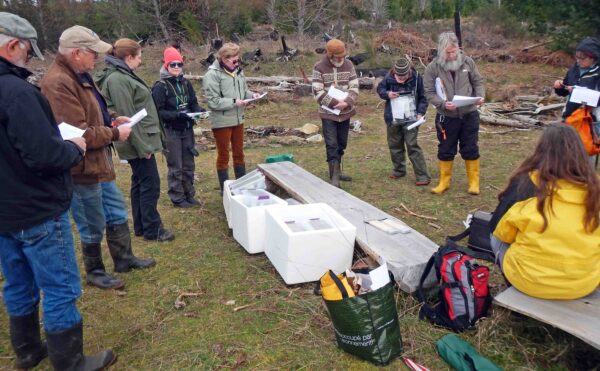 On March 7 and 8, sixteen very excited Taylor’s Checkerspot Recovery Project members and community volunteers gently placed more than 1000 precious Checkerspot larvae (caterpillars) into a butterfly reserve within Denman Island Provincial Park and Protected Area. The event was a coordinated effort, with larval release sites carefully chosen, weeded and prepared with healthy food plants for larvae in advance. Following release, local residents and BC Ministry of Environment staff will continue to monitor the larvae as long as they can find them. 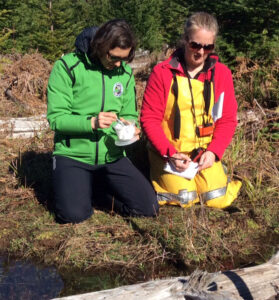 Approximately 250 more larvae will be released in the coming weeks and adult butterfly counts are planned for May. The larvae were raised at a captive rearing facility managed by Denman Island resident and passionate conservationist Peter Karsten. It’s operated with help from local volunteers, with seasonal staff and funding provided by Wildlife Preservation Canada. Captive butterfly rearing and releases are among many Taylor’s Checkerspot recovery actions planned and made possible with support from BC Ministry of Environment, BC Parks, BC Ministry of Forests, Lands and Natural Resource Operations, Environment Canada’s Habitat Stewardship Program, the Garry Oak Ecosystems Recovery Team, and the Greater Vancouver Zoo. 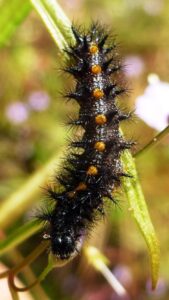 Taylor’s Checkerspot butterflies once occurred in over 20 places on southeastern Vancouver Island, from Courtenay to Victoria. Now, Denman Island is the only place in Canada where they are found in the wild! They’re clinging to survival within small portions of ephemeral wetland and meadow habitat in the new Denman Island Provincial Park and Protected Area and a few private properties. One of Canada’s rarest species, Taylor’s Checkerspot is federally listed as Endangered under the Species At Risk Act and is on the B.C. Conservation Data Centre Red List.