Restoration of Wet Meadows in Victoria

Kristen and James Miskelly are very active and dedicated GOERT members, biologists, and proprietors of the Saanich Native Plants  nursery at Haliburton Community Organic Farm.  In this article they describe one of several restoration sites at which they are contributing their expertise, time, and lots of volunteer labour:

The earliest written accounts of the Victoria area emphasize the openness of the landscape, often using words like “prairies” and “plains.” These open meadowlands were vast and varied and included not only the driest rock outcrops, but also Garry Oak-associated wetlands in moist swales and wetland margins. These rich productive bottomlands were some of the most attractive areas for agricultural development and as a consequence very few remain. The rocky sites that escaped the plough are now seen as the archetypal Garry Oak ecosystem, when in fact they represent only one end of a broad spectrum. At the wettest end of the range, Garry Oak ecosystems include riparian areas, wet meadows, and temporary to permanent wetlands. Examples can still be found in the Victoria area at places like Uplands Park, Beaver Lake, and Spencer’s Pond. Garry Oak-associated wetlands in Victoria vary greatly from one to the next, but there are a few species that are usually present and characterize these sites. Typical wet meadow species include Common Camas (Camassia quamash), Straight-beaked Buttercup (Ranunculus orthorhynchus), California Oatgrass (Danthonia californica), Western Rush (Juncus occidentalis) and One-sided Sedge (C. unilateralis). The wettest sites include wetland obligates such as Slough Sedge (C. obnupta), Common Spike-rush (Eleocharis palustris), Woolly Sedge (Carex pellita), and Marsh Speedwell (Veronica scutellata).

Elsewhere in our ecoregion, Garry Oak-associated wetlands are well-recognized and often high priority for conservation. However, in British Columbia they have been largely forgotten. The Haliburton Biodiversity Project is a local initiative that seeks to restore wet meadow habitat and provide an educational site to raise awareness about these kinds of habitats. This all-volunteer project at Haliburton Community Organic Farm in Saanich also works towards restoration and enhancement of dry Garry Oak meadow, aquatic, and forested areas. In addition, the project includes enhancing biodiversity features within the farmed areas of the property with native hedgerows and nesting boxes for bees, bats, and birds.

The centrepiece of the Haliburton Biodiversity Project is a constructed wetland and meadow restoration that began in 2009. Around the wetland volunteers are restoring from scratch the kind of wet meadow that once covered large parts of the Victoria area. When the project began, the seasonally flooded area around the wetland was a monoculture of non-native reed canarygrass (Phalaris arundinacea). Various strategies have been tried and tested to eliminate reed canarygrass, including tilling, mowing, smothering, and hand removal. Once areas are free of reed canarygrass, cardboard and leaf mulch are used to suppress the seed bank and create a blank slate for re-vegetation. Planting assemblages and densities vary depending on moisture and ecological characteristics. These restoration recipes are based on observations from local reference sites and visits to similar sites in Washington and Oregon. Trial and error has also played an important role!

There are several important lessons to be learned from the Haliburton Biodiversity Project. The first is that significant conservation gains can be made on small parcels of land. In the last five years a host of native animals have colonized the wetland and surroundings including frogs, insects, birds, garter snakes, and salamanders. Changes in the plant life have also been dramatic. Where once only non-native grasses stood, there have now been over 80 native plant species recorded. 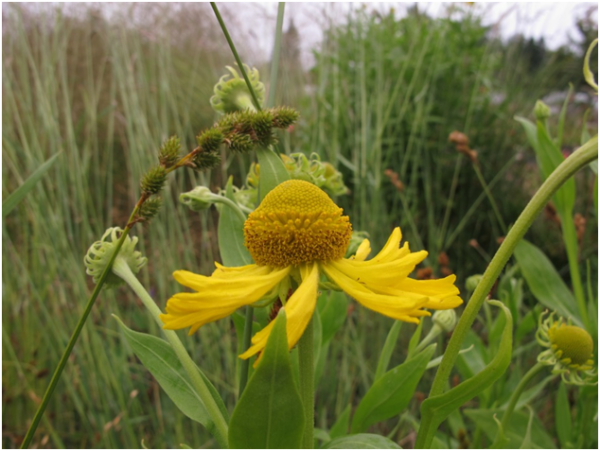 This year was a big year for the project. Long-toed Salamanders bred in the wetland for the first time and a rare plant, Vancouver Island Beggarticks (Bidens amplissima), colonized the site naturally. Another rare plant, Fragrant Popcornflower (Plagiobothrys figuratus ssp. figuratus), was re-introduced to the wetland after not being seen on Vancouver Island for more than 80 years. The second lesson from this project is that even severely disturbed sites have the potential to become valuable habitat. These kinds of de novo or ‘blank slate’ restorations are in their infancy in B.C. However, in other parts of our ecoregion, they have an established record of success. In Oregon’s Willamette Valley more than 1000 hectares of once agronomic field have been converted back to diverse native meadow. Here on Vancouver Island, Garry Oak ecosystems have been reduced so dramatically that trying to protect what is left is not enough. Recovery of these ecosystems and their associated species will require that more land be converted from present uses back to native habitat. The Haliburton Biodiversity Project is working to build the skills needed to develop wet meadow restoration in our area and it is our hope that these methods can be expanded to future projects.

If you’re interested in becoming a Haliburton Biodiversity Project volunteer, send a message to: kristen.miskelly@gmail.com