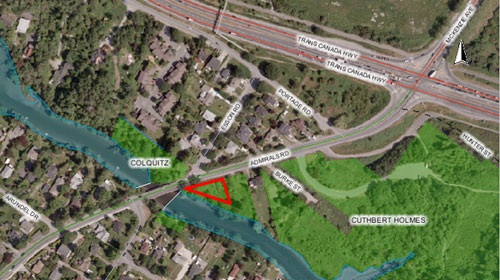 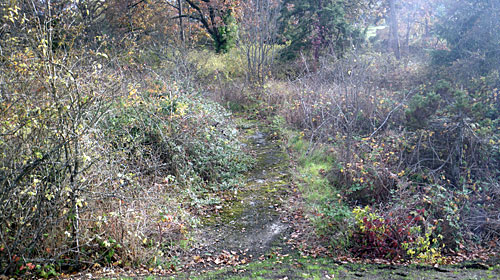 Before: the site is infested with alien invasive plants. Looking south toward Colquitz River

In late 2009, Saanich staff consulted with members of GOERT to develop a concept plan. In August 2010, the excavators arrived and prepared the site, removing non-native trees and invasive shrubs and grading the steep slope down from the sidewalk. The excavator operators must have been scratching their heads, but complied with our direction to leave the site surface rough. (To them, this is like leaving the job unfinished). 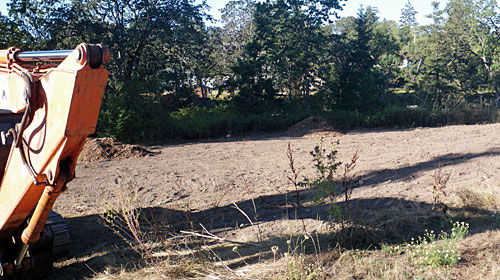 In mid-September the plants arrived and Saanich staff moved in to lay out the site design. On September 30th, during ideal weather conditions, we started planting. First, the trees; then a dense drift of shrubs adjacent to the existing native trees and shrubs parallel to the river bank. Next, we planted drifts of shrubs mixed with grass plugs, and then native grass seed liberally scattered in broad swaths. Finally, to provide structure and organic matter, and to create micro-climates and minimize erosion, we added a mix of leaf mulch and wood chips, and some logs as coarse woody debris (a.k.a. “free firewood” to one resident, who helped himself to a few pieces, but replaced them after being scolded by a passer-by!).
Other than occasional invasive plant control, and irrigation to get the plants through their first summer, the site will be left to develop in a natural state. As part of Saanich’s Pulling Together Volunteer Program, we plan to engage volunteers from the community to help with invasive plant control and planting of appropriate forbs as the site becomes established. 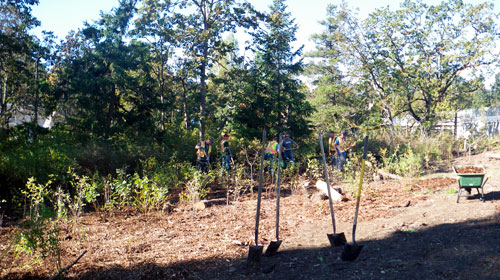 With spring on the horizon, we’re looking forward to seeing the site flush with green. With a bit of luck and, if needed, some judicious protection, the deer won’t get to it first. Next time you’re in the area, check out the site and let us know what you think!
Falaise Park Garry Oak Meadow
A small neighbourhood park in the Broadmead area, Falaise Park contains a remnant Garry Oak woodland and meadow. Many years ago, a playground was constructed in the middle of the once-spectacular meadow. In 2010, as part of the Federal Recreation Infrastructure Canada (RInC) grant, the old playground was dismantled and a new one with more modern equipment installed in the lower area of the park. Once the old equipment and concrete were removed, good soil from another park project was brought in and the area was seeded with native grass. 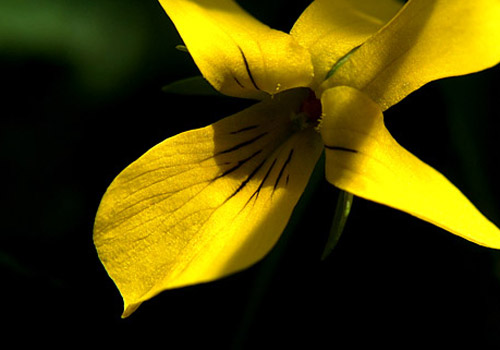 Thanks to a 2006 study by biologist Hans Roemer, and many years of observations recorded by artist and long-time Falaise resident Tannis Warburton, we have a good idea of the species that were once present. Over the next few years, elements of the former meadow will be restored using salvaged and purchased native forbs and ferns. Volunteers will be needed to help keep the restored meadow free of invasive plants, Orchard-grass in particular. A few Endangered Yellow Montane Violets still survive in the park and efforts are needed to restore healthier conditions for them as well.
For more information about these projects, or about Saanich’s park natural areas and the Pulling Together Volunteer Program, contact Marian McCoy, Saanich Parks Natural Areas Technician at 250-475-5522 or marian.mccoy@saanich.ca.