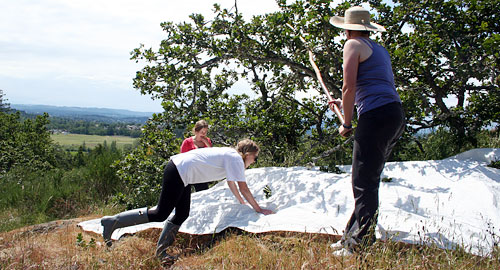 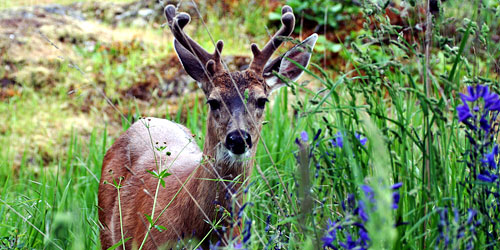 In 2003 the winter moth was discovered in Boston and by 2005 severe defoliation in eastern Massachusetts and on Cape Cod was discovered. Winter moth has now spread to six states (ME, NH, MA, RI, CT and NY).
In 2005 Boettner began working with Imre Otvos and Nicholas Conder at the Pacific Forestry Centre to import the fly to Boston from Victoria. In 2009 and 2010 they increased the effort by hiring four students from UVic to work with staff from the University of Massachusetts-Amherst. Each year they have been able to expand operations and scout more areas for the winter moth parasites.
The rearing is fairly simple. They locate Garry oak trees with feeding damage from winter moth and knock the caterpillars onto tarps. Insects are then hand-sorted and the winter moth caterpillar are collected in buckets. The researchers have only about three weeks in spring and summer to collect the caterpillars after they have been attacked by the flies. 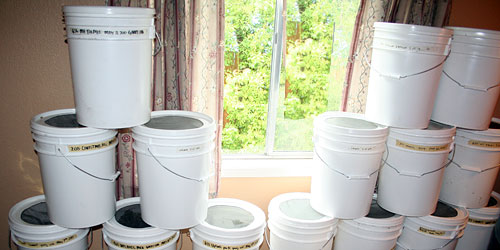 Winter moth caterpillars being reared in Boettner’s hotel room. “It kind of freaks out the maids.”

In 2010 they collected about 35,000 winter moth caterpillars, primarily from Garry oak trees, at Mt. Tolmie, Summit Park, Beacon Hill, Christmas Hill, Uplands Park, and Cattle Point. “We got to Mt Douglas a bit too late; it was an early year,” said Boettner. Caterpillars are fed and reared in his motel room to give the fly parasites time to grow. They are reared in about 80 five-gallon buckets. “It kind of freaks out the maids,” says Boettner. There is peat moss in the bottom of the buckets where the caterpillars pupate. From the buckets they harvested 32,500 pupae this year. The pupae were overnight-shipped to a USDA quarantine facility at Otis Air Force Base on Cape Cod.
The pupae are now overwintering in a large temperature controlled growth chamber in quarantine. The researchers expect about 16,000 flies to hatch, which will be mated in spring. They hope to release 8,000 mated females into the field. Each female fly can lay about 2,000 eggs over her lifetime, so this will put 16 million eggs into the wild. The flies will be released to control winter moth in Massachusetts, where there are about one million acres infested with winter moth.
Boettner is excited that this year, in addition to their collections in BC, they were able to recover flies from four of their six release sites in Massachusetts, which means that the parasitic fly populations have become established there. This will allow the researchers to release flies in new locations. “We hope that in a few years we’ll start seeing the 50% mortality rate that you have in BC (note: Soil predators already kill 60-80% of Massachusetts winter moth pupae in the soil, which is similar to BC, Nova Scotia, and Europe).”
“It has been a huge help to be able to work with the parks in BC, plus the people at the Pacific Forestry Centre in Victoria (Imre Otvos, Vince Nealis and Nicholas Conder), as well as with the four students from UVic each year,” says Boettner. “It has truly been an international effort.”
George “Jeff” Boettner is with the Department of Plant, Soil and Insect Sciences, University of Massachusetts Amherst. All photos by George Boettner.
GOERT’s Invasive Species Steering Committee has drafted an account on management of winter moth which will soon be available as part of the field manual on Invasive Species in Garry Oak and Associated Ecosystems in BC.