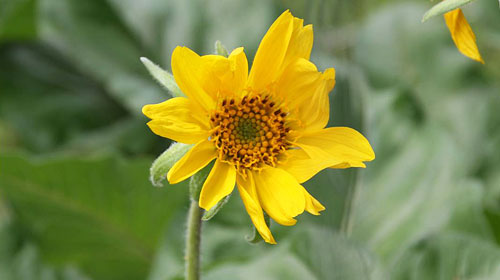 Deltoid Balsamroot flower head, showing the yellow ray petals that surround a compound disk of inflorescences that mature from the outside inwards (photo by Aimee Pelletier, Parks Canada)

Parks Canada staff at Fort Rodd Hill & Fisgard Lighthouse National Historic Sites have been literally “busy as bees” this spring, carrying out a cross-pollination experiment to assist in the recovery of Endangered Deltoid Balsamroot (Balsamorhiza deltoidea) at Fort Rodd Hill. Deltoid Balsamroot is showy native sunflower that once grew abundantly in Garry Oak woodlands in our region but is now restricted to eight relatively small natural populations (COSEWIC 2009).
For unknown reasons, the small population at Fort Rodd Hill produces very little viable seed. There are a number of potential causes, including genetic bottlenecking, self-incompatibility, and inadequate pollination. A recent study from Washington, where Deltoid Balsamroot is more abundant, demonstrated that hand-pollination of inflorescences with pollen collected from nearby plants can increase the development of viable seed by as much as 50%. The nearest pollen source for the Fort Rodd Hill population is the small but flourishing population in Mill Hill Regional Park, where restoration efforts by volunteers and Capital Regional District (CRD) staff, such as the annual “Broom Sweep”, have benefited the population by removing competition from invasive species such as Scotch Broom. Protecting the plants from deer and rabbit browsing using mesh cages has also helped encourage blossoming. 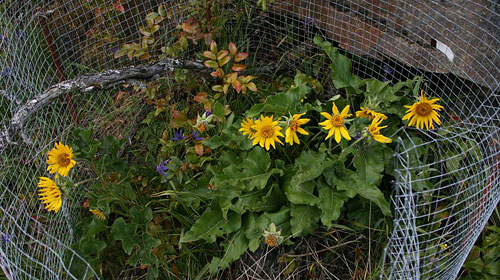 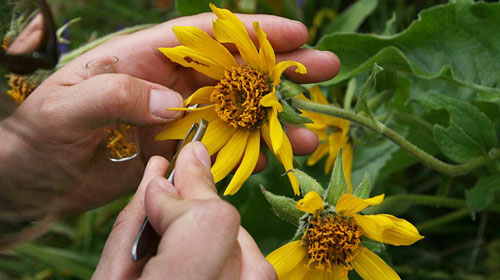 Like other members of the Asteraceae family, Deltoid Balsamroot flowers are composed of an outer ring of ray petals and a flower head comprised of many individual inflorescences. Because inflorescences within a flower head mature at different times, with maturation progressing from the outer inflorescences to the inner inflorescences, several pollen collection visits were made to Mill Hill over the course of 6 weeks from late April to early June until all inflorescences in the Fort Rodd Hill flowers had matured and been hand-pollinated. 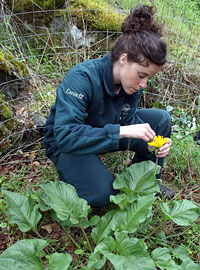 Now it is time to watch and wait while the seed matures to determine if the experiment has been successful. Once ripe, the seed heads will be collected into fine mesh bags to complete drying. Seeds heads will then be dissected and the seed sorted into categories that are known to reflect seed viability. Plump seeds have been observed to have high percentage germination while shrivelled, empty seeds typically do not germinate.
Seeds will be propagated by experienced personnel with the hope that they will produce healthy seedlings than can, in a few years, be transplanted back into the Fort Rodd Hill population to augment the low numbers. In the event that the cross-pollination experiment is not successful in producing viable seed, a small percentage of seed from the Mill Hill population will also be collected this summer. Some seed will be planted in-situ and some will be propagated in a nursery. Nursery-grown seedlings may be used to augment the Mill Hill population as well as the Fort Rodd Hill population. If you have any questions about this research project, please contact Aimee Pelletier (250-478-5140). 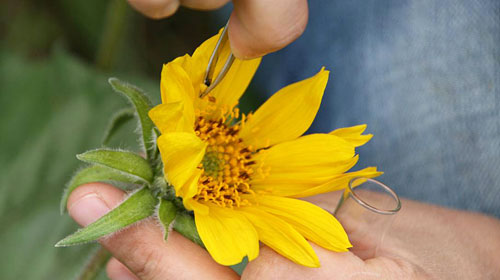 Tweezers are used to rub the anthers collected from Mill Hill across the stigmas of Fort Rodd Hill flowers to transfer the pollen (photo by Susan MacIsaac, Parks Canada)