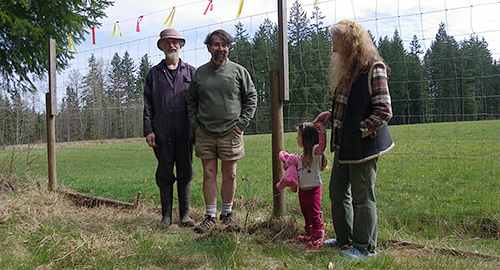 The term biodiversity refers to the diversity of species in an ecosystem, but did you know that biodiversity also refers to the genetic diversity within a species? Although some people may think that Garry Oak ecosystems are limited to the southern part of Vancouver Island, and that all Garry Oaks are the same, the ecosystems extend north to the Comox Valley and include a diversity of genetic populations. Biologists have identified five distinct genetic Garry Oak populations native to the Comox Valley, whose closest relatives are as distant as Redding California or as nearby as Yellow Point on Vancouver Island.

Regrettably, these populations have collapsed to less than 1% of their original distributions. The 15 square miles of Saanich-like Garry Oak prairie in the Comox Valley, which Captain Richards described in 1865, is now reduced to about 200 aging trees, mostly on private land and constrained by development. The Vanier oak site (a priority site for GOERT) lies at the topographic and ecological centre of this original oak prairie. 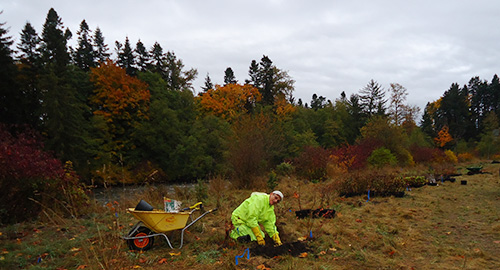 Originally, the plan was to plant 2,250 Garry Oaks from three local genetic populations ranging from Courtenay to Black Creek, on public and private land, by 2020. The project has proven to be immensely popular and continues to gain support from private landowners and regional and municipal governments. All 565 of the original stock were placed within the first ten months—and the demand continues to grow. While the plan was to locate trees only along farm fence lines, most landowners expressed the wish to re-build historic Garry Oak groves of between 25-200 trees, with requests to incorporate native camas lilies as well.

The planting project gained the support of the Comox Valley Regional District and the City of Courtenay. With the support of the City, Garry Oaks and camas were incorporated into the landscaping of the Airpark, the Courtenay Railway Station, and the riparian replanting of a historical property, Medford Meadows, along the lower Puntledge River. 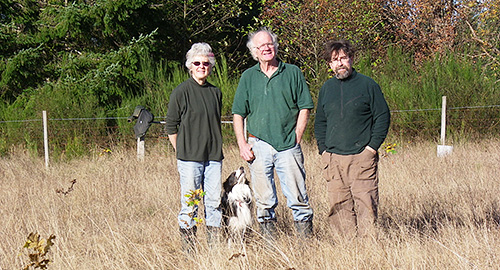 The Comox Valley Regional District, in large part thanks to the enthusiastic support of Councillor Jim Gillis and Chair Erwin Grieves, also became engaged in introducing Garry Oaks to the landscape in a number of ways. Eight oaks were planted at the new Headquarters Regional Historic Park on the banks of the Tsolum River. Although this might seem an inclement place for Garry Oaks, various Garry Oaks have been planted and fared quite well in that area—in fact Garry Oaks can even be found in Gold River. (In Washington and Oregon, Garry Oaks are often found as a wetland or riparian tree, and these wetter sites were likely a significant component of Garry Oak ecosystems before the first Europeans began draining and developing them.)

A second project is launched
The drive to recover the presence of these heritage trees in the Comox Valley led to a second CVN Garry Oak restoration project. Both municipal staff and elected politicians have demonstrated a keen interest in incorporating native oaks into landscaping projects wherever it is appropriate. This interest reached a turning point with the announcement of the building of two new hospitals in Courtenay and in Campbell River. Jim Gillis and Dr. Maingon negotiated a landscaping arrangement with Tom Sparrow of the Vancouver Island Health Authority and the landscape architect Bob Lilly to plant Garry Oaks at each site (50 in Courtenay and 50 in Campbell River). In addition, in order to mitigate the loss of 875 Douglas-firs incurred with the clearing of the site, the hospital authority and the regional district agreed to support a campaign to distribute 1,000 Garry Oaks to the public upon the opening of the new hospitals in 2017. 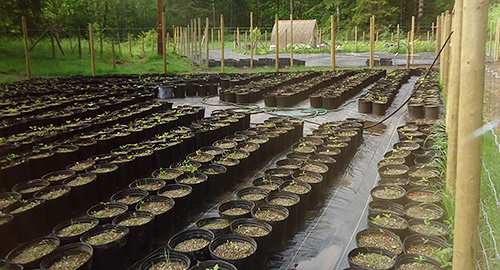 Garry Oak nursery opens
To achieve these targets it was necessary to create a nursery infrastructure and immediately put some 5,000 acorns, leftover from the first project, into pots. This was made possible with a Heritage grant of $5000 from the regional district. Throughout March, thanks to CVN volunteers Kathleen Hennig, Mike McNulty, Ernie Stefanik, and Erna Smith, the acorns were potted and a half-acre facility was constructed. Auspiciously, the first seedlings came out in open air on Earth Day, exactly 365 days after the start of CVN’s Garry Oak restoration project!

The project itself continues to grow daily: of the 5000 acorns, about 3,500 have sprouted to date, and more sprout each passing day. Everything planned is progressing well on target. The plan is to continue to grow 1000 Garry Oaks per year, and make them available free of cost for civic landscaping and for restoration projects undertaken by the various environmental groups in the Comox Valley.

In addition, since the facility now exists, the group is taking steps to grow a variety of Garry Oak ecosystem plants to complement tree planting. As Dr. Maingon says, “the success of this project has been made possible because of its simplicity, re-building the environment one tree at a time, and because the simple act of planting is a time-honoured spiritual act which elicits the good will of the community.”

Note: There is a Garry Oak nursery starting up in Victoria as well. The Garry Oak Meadow Preservation Society (GOMPS), in partnership with the City of Victoria, is opening a facility dedicated to producing oaks of local genetic origin. The City of Victoria has agreed to sub-license a former nursery site to GOMPS and in return, a percentage of trees will go to the City of Victoria free of charge. The majority of the nursery’s inventory will be for sale to other municipalities, major landowners, and the general public. For more information, please see www.garryoak.info.

Watch a video about the Comox Valley tree planting projects