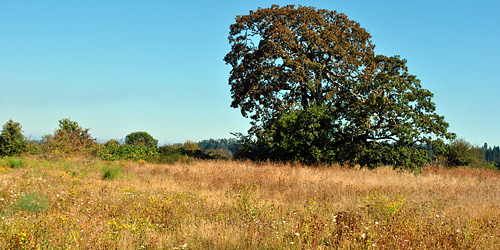 A large Garry Oak in a meadow of Yarrow, Queen Anne’s Lace, and grasses at Nanaimo Estuary (photos provided by Steven Godfrey)

By Steven Godfrey, Field Operations Coordinator
Vancouver Island Conservation Land Management Program
The Nature Trust of BC
Did you know that the estuaries and coastal wetlands of BC make up less than 3% of our province’s coastline, yet provide habitat to over 80% of all coastal fish and wildlife species? Around 500 plant and animal species can be found in the estuaries and coastal wetlands around BC, 70 of which are federally listed as Endangered or Threatened. The estuaries on Vancouver Island are top of the class; after the Fraser River, half of BC’s 8 most important estuaries are located on Vancouver Island. One of these highly productive systems is the Nanaimo River Estuary, which is ideally located habitat for Pacific Flyway migrant waterfowl and other birds.
Despite their importance, over 40% of estuaries throughout BC are threatened by development, modification, and pollution. Around 60% of the estuarine habitat along the Strait of Georgia has already been lost. In recognition of this, The Nature Trust of BC, along with their conservation partners (Ducks Unlimited Canada, Habitat Conservation Trust Foundation, Environment Canada, and the Provincial government) began securing habitat in 1987. Since that time, 8 acquisitions have been completed covering 180 ha (440 acres), including intertidal marshes, farmland, and riparian areas. Restoration of the estuary began in 1988 with the removal of low dyke sections in the tidal marshlands in order to re-establish natural tidal flows and vegetation. In 2006, 22 hectares (54 acres) of tidal marshland were restored by breaching the northern dike on Holden Creek.
Garry Oak Habitat at the Nanaimo River Estuary
One interesting feature of the Nanaimo River estuary is the abundance of Garry Oak trees in the upland habitats, both along the riverbank and within the forested areas. This, combined with unique sandstone outcrops populated by Douglas-fir, Garry Oak, Arbutus, Bitter Cherry, Grand Fir, and Bigleaf Maple make for a truly rare estuarine ecosystem. Shrub species found here include Indian-plum, Tall Oregon-grape, Kinnikinnick, and Saskatoon. Herbaceous species of note include Common Camas, Northern Rice-root, and Pacific Sanicle. The estuary, grasslands, and surrounding mixed forests support a variety of breeding bird species, including Golden-crowned Kinglet, Chestnut-backed Chickadee, Pacific-slope Flycatcher, Swainson’s Thrush, and Yellow Warbler. The area also provides foraging and roosting habitat for Short-eared Owls, and Bald Eagles, and other raptors. 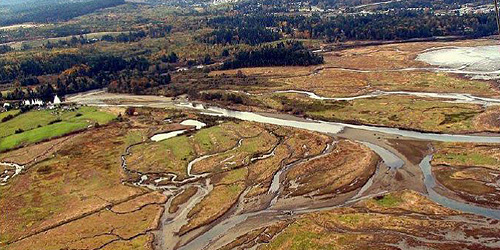 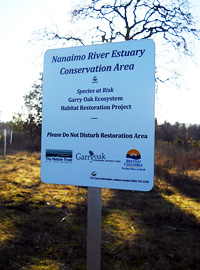 In 2011 GOERT, The Province of BC, and The Nature Trust of BC partnered to develop a restoration plan to restore a portion of Nanaimo Estuary to suitable Coastal Vesper Sparrow habitat. The Coastal Vesper Sparrow is a ground-nesting passerine, preferring dry, open areas with short, sparse grass or herbaceous cover and patches of bare ground, using scattered trees or fence posts for cover and perching. Overgrowth by invasive shrubs (primarily Scotch Broom and Himalayan Blackberry) can alter ideal short grassland habitat into shrub or long grass through ecological processes of nitrifying the soil or by dense infilling, leading to dominance over native species.
A total area of nearly 2000 m2 of invasive plant coverage has already been removed from the Nanaimo River Estuary Conservation Area in order to both improve habitat conditions for potential Coastal Vesper Sparrow use, and to promote growth of native grass and shrub species. Garry Oak and native shrubs are being planted to increase future suitable perching sites as well as to shade out regeneration of Scotch Broom and Himalayan Blackberry. There is still plenty of hard work left to do at the estuary, and I believe hands-on land stewardship work is vital to achieving our goal of restoring and maintaining natural balance within local ecosystems.
The GOERT project was funded by Environment Canada’s Habitat Stewardship Program.