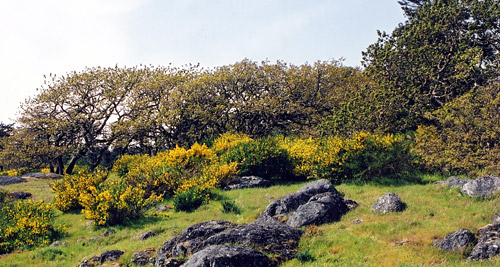 Non-native (exotic or alien) plant and animal species, introduced into an ecosystem where they did not previously live, are considered invasive when they spread aggressively and impact native species. Whether introduced by well-intentioned gardeners, or accidentally imported, biological invaders are a serious ecological problem.

Invasive species in Garry oak ecosystems include plants and animals. At least 173 invasive species have been identified including 4 trees, 15 shrubs, 147 herbs, 1 reptile, 6 birds and 7 mammals. A few of them include:

Invertebrates — Four invasive insects — the winter moth, jumping gall wasp, oak leaf phylloxeran and gypsy moth — have caused, or have the potential to cause, serious damage to Garry oak trees, and the introduced black slug may be dining on populations of rare plants.

Other oak pathogens — Another possible threat to Garry oak trees is a fungal-like pathogen contributing to a disease know as ‘Sudden Oak Death’ (SOD) that has been spreading in coastal areas of North America. So far, Garry oak trees have not been affected, but several other oak species are shown to be prone to the disease.

The prevalence of invasive exotic plants in Garry oak and associated ecosystems in British Columbia is well documented. Roemer (1972) found that 25% of the species within the core of the Garry oak range in British Columbia were introductions from the Mediterranean and other parts of Europe. He noted that these species are so fully integrated into the ecosystem that they comprise a part of the characteristic plant association. Subsequent sampling at different sites in 1995 revealed that 40–76% of the herbaceous species in camas meadows of the core area were exotic, and that exotic species comprised 59–82% of the herbaceous cover, suggesting an increased presence in exotic species over the 2 decades (Roemer 1995).

An assessment of regional parks within the Capital Regional District concluded that 100% of the parks are threatened by the invasion of non-native plant species, 36% of them severely so (Fleming 1998). Out of 546 species of vascular plants of Garry oak and associated ecosystems, 29% of them are introduced.

Although relatively fewer shrub species (22%) are introduced compared to the proportion of introduced herbaceous species, introduced shrubs pose some of the most serious threats to Garry oak ecosystems in British Columbia.

Scotch broom, introduced to the region as a garden ornamental in 1850, has since spread to become a dominant component of much of the Garry oak landscape. It has also invaded other regions of British Columbia and Canada, as well as the USA, Europe and other parts of the world. Scotch broom has dramatically altered the vegetation structure of these ecosystems by forming a dense shrub layer where shrubs were formerly absent, sparse, or at most patchy. This shrub layer shades out native understorey species adapted to open conditions. These changes can negatively affect habitat suitability for animal species, including many birds and butterflies, that require open vegetation structure.

Furthermore, Scotch broom is a nitrogen-fixer, and thus has the potential to change ecosystem-wide resource supply. It also generates large amounts of woody fuel that can support high intensity fires and in this way alter the natural disturbance regime.

Gorse shares similar characteristics and destructive potential with Scotch broom but to date is not as widespread in British Columbia.

Exotic grasses are a ubiquitous presence in Garry oak ecosystems, and dominate the herbaceous flora at many if not most sites. They include perennial grasses, primarily the result of past and current intentional seeding for livestock forage and erosion control, and annual grasses that were for the most part accidental introductions. Common species include orchardgrass, common velvet-grass, Kentucky bluegrass, barren brome, sweet vernalgrass, hedgehog dogtail, perennial ryegrass, and others. Many exotic grasses can directly out compete native species by reducing light at the ground level and aggressively capturing water and nutrients. They also have the potential to alter ecosystem processes by producing nitrogen-enhanced litter, changing ground-level microclimates from extensive litter, altering fire regimes as a result of their high flammability and enhancement of soil moisture deficits, and other characteristics.

The potential for these ecosystem-level changes is particularly great when exotic grasses invade ecosystems that were not previously grass-dominated. The historical composition of Garry oak plant communities in British Columbia, especially those from the core area, is largely unknown. Consequently, the previous relative abundance of grasses and forbs is not clear, and to what extent these grass invasions have caused ecosystem changes has not been directly investigated. Introduced forbs are also numerous in British Columbia, and include dovefoot geranium, hairy vetch, common vetch, cleavers, chickweed, sheep sorrel, and hairy cat’s ear. Invasive forbs are not generally described as being as destructive as invasive grasses in Garry oak ecosystems.