Why Are They Disappearing?

Over the past 150 years, waves of settlers have been attracted to Vancouver Island’s southeastern coast. Land conversion for agricultural, residential and industrial development has vastly reduced the extent of Garry oak ecosystems. Less than 5% now remains in a near-natural condition, and that too is threatened.

Threats include habitat loss, fragmentation of larger areas of habitat into smaller, more vulnerable patches, encroachment of woody species as a consequence of fire suppression, and invasion of exotic species that out-compete native species. 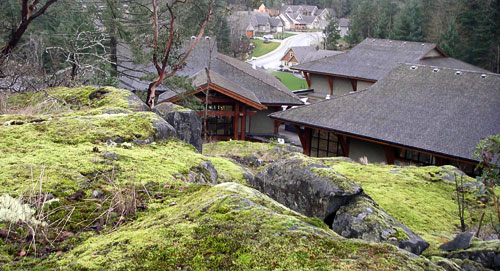 Subdivisions and shopping malls, transportation and utility corridors, farms and factories — development contributes to habitat loss and fragmentation. As habitat is lost, species lose their homes and must move or perish. Fragmented ecosystems are much more vulnerable than unfragmented ecosystems to natural forces such as weather, disease and predation, and to human activities in adjacent areas. For example, Garry oak patches surrounded by highly developed areas contain fewer species of birds than patches in less developed areas and are more likely to suffer from overuse, pollution and invasions of exotic species.

Frequent fires in Garry oak habitats thin out woody species and maintain the open canopy. In the past, wildfire from lightning and fires set by First Peoples to promote production of camas plants, an important food source, prevented shrubs and fire-sensitive trees from becoming established. Present day fire suppression enables species such as Douglas-fir to shade out oak stands. Many stands ultimately convert to conifer forests. Shrubs crowd out meadow wildflowers and other species.

Invasive, exotic species compete with native species and are often more successful, because of their ‘strategies’ for reproduction and growth, and their lack of natural predators. In turn, they can affect ecosystem processes. Scotch broom and gorse pose some of the most serious threats to Garry oak ecosystems by shading out open understorey plants and altering conditions needed by many birds, butterflies, and other species. In our region, other “introduced” species that are out-competing native species are English ivy, Himalayan blackberry, daphne, several grasses, European starlings, grey squirrels, gypsy moths, and others.