What Remains of Garry Oak Ecosystems?

Collectively, Garry oak and associated ecosystems are among the most endangered in Canada. Once common in coastal areas of southwest British Columbia, less than 5% of these ecosystems remain in near-natural condition. Most of the remnants are in isolated, fragmented communities that have no connection to other Garry oak communities, thereby reducing migration of populations or mixing of genetic material of species from one area to another.

At this time, because so much habitat has been lost or degraded, more than 100 species of plants, mammals, reptiles, birds, butterflies and other insects are officially listed as “at risk” in these ecosystems. 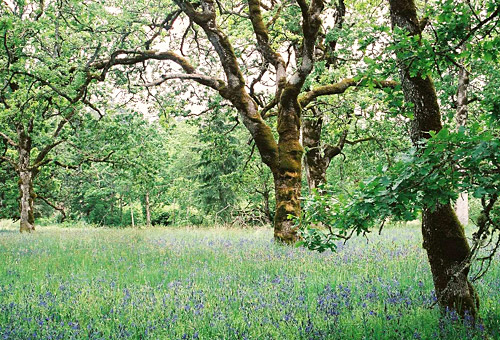 The following map and the table compare the 1800 and 1997 distribution of Garry oak ecosystems in the Victoria area. The Municipality of Highlands was not included due to lack of data.

The areas covered are where Garry oak (Quercus garryana) was believed to be the dominant tree cover, or co-dominant cover with Douglas-fir (Pseudotsuga menziesii) or arbutus (Arbutus menziesii). Other areas may have had and still have Garry oak as a minor component of the ecosystem; however, these areas were not considered for this mapping project.

The following maps and tables compare the distribution of Garry oak ecosystems in regions other than Greater Victoria and Saanich Peninsula areas in 1800 and 2003.

Note that only 4.5% of the deep soil sites have not been developed, and the remaining “scrub oak” sites are on rocky outcrops, steep slopes and similar shallow soil areas that are less appealing for agriculture and residential uses.

In the Nanaimo, Parksville and Nanoose area, only about 33% of the Garry oak habitats from1800 exist today. Most of these fragments are tiny, isolated, and overrun with non-native species such as Scotch broom, Himalayan blackberry and non-native grasses. Although there have been severe losses of Garry oak habitat in the Nanaimo and Parksville area, there is an opportunity to protect several outstanding sites. Harewood Plains and Harmac/Joan Point are relatively intact remnants of shallow soil Garry oak ecosystems, containing several rare plants of provincial and national significance. For example, Muhlenberg’s centaury (Centaurium muehlenbergii) has been found in Canada only at Harmac and at one park in Victoria. All of Canada’s seven remaining populations of bog bird’s-foot trefoil (Lotus pinnatus) are clinging to survival in the Nanaimo area. Experts currently rank Harewood Plains as the highest priority Garry oak ecosystem site on Vancouver Island for conservation.

No measurable shallow soil ecosystem occurred in the Comox valley. The 98 ha shown in the table (above) occurred on Hornby Island, with over half still remaining (57 ha).